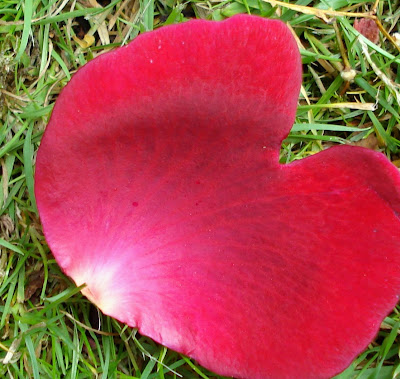 The French poet and diplomat Paul Claudel spent 20 years in China and Japan following World War 1. He was one of the first western poets to be inspired by haiku and the like. His Hundred Movements of the Fan, consists of very short poems "only one phrase, enough just to support a breath - a sound, feeling, words - or the beating of the wing of a fan". Here is one which this rose petal fallen on the grass in our garden prompts me to quote:
A rose so strongly red
it stains the soul
like wine.
All the poems in the collection in the original French and in the translation by Andrew Harvey and Iain Watson, are arranged in patterns to this (which Blogger does not seem to want me to reproduce), and accompanied by two Japanese characters.
.
One thing in particular strikes me the other night about the TV interview with the American photographer William Eggleston (BBC 1 Imagine), whose idiosyncratic black and white and colour photographs of objects and places, I find profoundly inspiring and thought-provoking despite or perhaps because of their great simplicity. He says that he only photographs a subject once so as not to have the problem of making a choice about which one to print.
.
In the vegetable garden, I search among the plants for the first French beans, of which the small pods mimic the stems and leaves. Looking for zucchini among, their exuberant plants, whose spreading leaves are already beginning to overshadow rows of beans and lettuces, I find myself challenged by the same sort of disguise adopted by the fruit.

Taking just one shot of a subject seemed the height of professionalism. Also, I liked the idea that he sought out the mundane and then waved his magic lens and - voila!

I don't know Eggleston's work, didn't see the programme; you've made me curious. Occasionally, I'm brave enough to just take the one shot, for the same reason, but only when I don't care too much about the photo. Of late, I've simply thrown whole batches out without a worry, because the close looking and appreciation which the act of taking the photo has demanded has been enough, the final product would be unimportant clutter. I'm quite pleased about this.

I love that first thing especially, the rose petal and the poem. I'm always pleased when Andrew Harvey's name comes up, he's an interesting polymath.

The photograph of the rose petal is very appropriate as it seems a small object represented as a sample of a vast complex of feelings. The illusory size of the petal - i think - does this.
I think also that William Harveys poem is excellent. I am not sure whether counting the number of syllables by line or even by poem is effective. It is better, like Harvey, to work with images and lines rather than numbers.