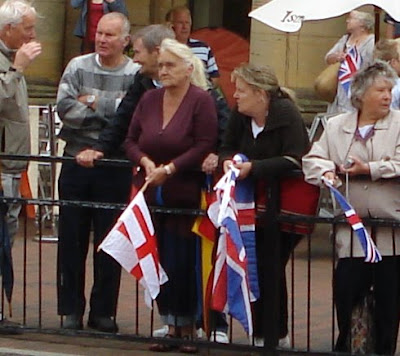 Waiting for the soldiers. The people of Tunbridge Wells line the streets to welcome the return from Afghanistan of the 1st Battalion, the Princess of Wales's Royal Regiment. There is a parade at the Assembly Hall. The people I talk to have admiration and affection for the soldiers but do not seem to understand what they are being asked to fight for.
In the Grove, three boys come up behind me and roar past on skate boards. One extends his arms like wings and bends his knees so that he is a few inches off the ground. It brings to my mind the games we used to play as children when we pretended to be be fighter planes - spitfires, hurricanes and, I dare say, messeschmitts. There was a certain noise we used to make not unlike the skate boards, but similar: a nasal "aeirr... ung", which, 70 years later, I can still hear in my mind
I pass a few moments with neighbour, Devern, during which we indulge in a luxurious grumble. The town hall building is being sold off to developers, who plan to turn it into a hotel and a shopping centre. The abandoned cinema site opposite the town hall is still undeveloped despite planning permission for a hotel and shopping centre. Council rates cannot be charged for unoccupied buildings with the result that they remain unoccupied much longer than should. The local paper is useless. The ground is too dry and it is raining everywhere except in Tunbridge Wells. And so on. Ah that's better!
Posted by Unknown at 4:12 pm

The town hall being sold off to developers while the councillors themselves were no doubt sold into moral bondage years ago. If this is the state-of-play in gentle TW, imagine how things are elsewhere.

Parades. Hate the war but have always sympathised with those whose job it is to travel along predictable roads in under-protected vehicles. Or on foot. Hereford had a parade this week and I would have gone had I received notification. But would I have waved a Union flag? Delicate point of etiquette.

"...but do not seem to understand what they are being asked to fight for."

There is a lot of that in my neighborhood, too. I think we were frightened into accepting our going into Iraq by the surprise attacks of 9-11. Then our fear levels were kept unnecessarily high with the excessive measures of Homeland Security here at home.

No doubt, we need to be watchful of developments around the world, as they pertain to our (read everyone's) security, but I'm not convinced we are on the right track.

Having lived through the VietNam 'conflict' and watched how our young men and women in the military were mistreated upon their return, it is comforting to know the receptions today are rightfully warm, loving and respectful.