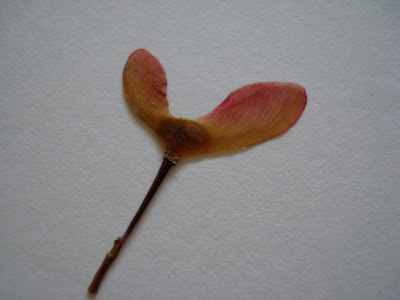 I find this perfect gadget, designed for flying, stored between the pages of a notebook, pressed, as the Victorians used to press flowers.

Whatever you may think of the BBC Radio 4 soap opera called The Archers, about country people living in the fictional village of Ambridge, you do not expect a reference in it to quantum mechanics and Schroedinger's (is it or isn't it?) Cat. Last night however Shroedinger makes it on to the soap. A newish character, a crotchety, retired professor, who is the father of the local vet, has come to live in Ambridge, having confined previous visits to mercifully short stays. On arrival he insists on visiting the village shop, where he picks up the gossip, about a cut-glass vase which goes missing and then reappears. Hence his observation, to a bewildered son and daughter-in-law, about its similarity to the elusive cat which, though it may be new to the Archers, has featured before in this blog and that of Barrett Bonden.

Our hedge, which is pitched at the top like a roof, must be nearly seven foot high at its highest point. Its height is determined by how far and how high I can reach with the shears, (mechanical or electric, I use both). Looking at it today, I realize that, as one is supposed to shrink as one gets older, and that I have therefore probably shrunk by quite a few millimeters, that it follows that the hedge is a few millimeters lower than it used to be.
Posted by Unknown at 2:46 pm