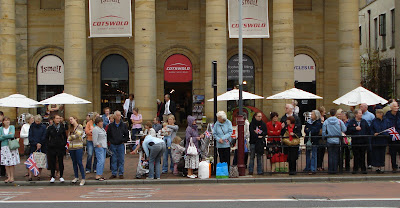 Waiting for the soldiers 3.
This afternoon behind me, over the High Street and Common are black clouds rolling across a grey sky. In front of me, over the Grove, is blue sky with puffy white clouds moving fast in the wind. That is 10 minutes ago. Now the sky overhead is overcast and the rain is beginning to fall in large, heavy drops, as thunder growls and passing cars hiss over the wet tarmac.
The fashion which said: to hell with rhyme and metre as long as you express yourself freely with honesty and originality, is long past. And a good thing on the whole. A book arrives, this morning, from America to remind me of this. It is the collected poems of the near, forgotten American poet, Wendel Kees, whose work was referred to me a few days ago by my brother. Says David Wojahn in the introduction: "Kee's poetry exhibited nothing of Surrealist, Beat or Confessional, and in an era, during which verse in open forms became the prosodic party line, Kee's frequent reliance on received poetic form and meters made his writing look decidedly out of date. " I suspect it doesn't any more, which may be good news for Barrett Bonden, who recently began to post sonnets and a villanelle on his technically inclined blog, Works Wells. Particularly so because the volume which arrived to day contains five villanelles and - Bonden has it seems himself been contemplating one - a sestina.
Posted by Unknown at 2:27 pm

I much appreciate these despatches from the free vs. rhyme/metre front. This latest brings the added revelation that poetry can be out-of-date and implies that anything which rhymes and/or scans is passé. I find this salutary but luckily I can ignore it. Despite the stuff I post I am not really competing for readers' attention but simply trying to learn what is and isn't possible. In a year or so I'll have reached the poet's equivalent of the 11-plus.

My sestina aspirations have been ditched. Given the draconian rhyming rules I foresee great difficulties escaping the "obvious rhyme" tendency. I am trawling Brewer for new forms. The ballade seemed promising until I discovered it too contains rigorous retriction on the number of rhymes. Similarly with the rondeau, rondel and - especially - the triolet. I am beginning to understand why people have been tempted to ditch the rules.

Frances' Stillman's 'Poet's manual and rhyming dictionary' is to be recommended.

I really think form is coming back, at least in the west; apparently in the Persian and Arabic speaking worlds, for example, which have been constrained by form until much more recently, they are luxuriating in the freedom from it - so the ghazal specialists say anyway. I think post-modernism says do what you like anyway. Milton had a point that rhyme can chime a little inanely after a bit.

BB: In fact anything that supports fashion will probably soon be forgotten.

Lucy:Thanks for the tip about Frances Stillman. Your experiments with ghazal were certainly inspiring.