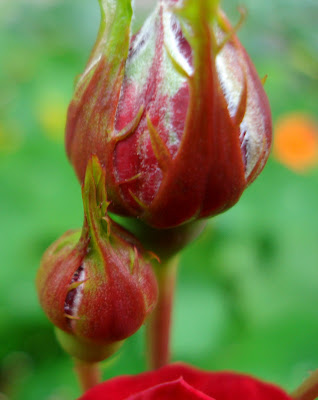 Today's rosebuds.
.
This morning I set out leeks, perhaps the easiest and most trouble free of garden tasks. You bore holes with a dibber, drop in the slender leek plants, which you have dug up from the row where the seeds were sown in the Spring, and Bob's your uncle. Oh yes, and then you go down the line of plants with a watering can without its rose, and fill each hole with water, which draws down the roots and ensures that they take. The space round the plants fill up naturally with the surrounding soil and with the leeks themselves as they fatten.
.
Are Walter Scott's novels as boring and artifcial as many people apparently believe? I read Ivanhoe when I was young, and found it exciting enough, though not enough to make me want to tackle others. Thinking today for some reason about Scott, I come across these words which he quoted from Don Quixote in his journal when, aged 54, and the father of 12 children, he realized that he was facing financial ruin. "Patience, cousin, and shuffle the cards, " he wrote. The ruin, when it came, drove him to produce almost a dozen more novels on top of his already vast literary output, to pay off his debts.
Posted by Unknown at 2:30 pm