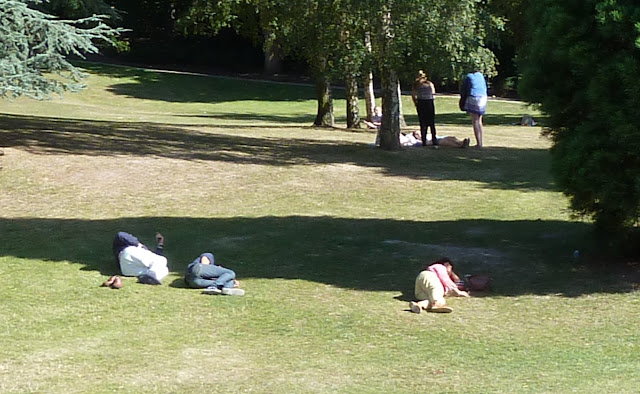 Figures in a landscape. Calverley Ground. (Click for whole photograph).

"When we arrived in my grandmother's dark kitchen in Sunday after Vespers, it was lit by a ray of sunshine in which the flies were dancing and there was a sound like a little bubbling spring. It was a daube which since midday has been murmuring gently on the stove, giving out sweet smells which brought tears to my eyes." Pierre Huginin, Les Meilleurs Recettes de Ma Mere, quoted by Elizabeth David in French Provincial Cookery.
Posted by Unknown at 5:09 pm

Here's a sentence from a book I have just started to read. Would you like to guess the author?

"He liked his new acquaintance, who struck him as in a manner clinging to him, who was staying at a hotel presumably at that hour dismal, and who, confessing with easy humility to a connexion positively timid with a club at which one couldn't have a vistor, accepted, under pressure, his invitation."