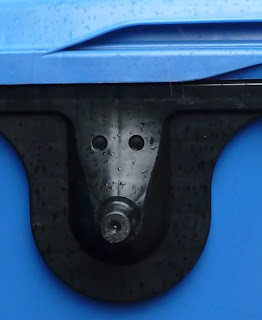 As I walked up a hill I see this wheelie-bin part of which reminds me of a pig. If I were scultpting a pig, this is how  I would do it.

The family photographs album, which I am collating, I realize today, spans five generations.  Within  that span, the youngest descendent of my paternal Grandfather has 15 other relations from whom he is directly descended. This pattern holds true for everyone, everywhere, of course,  where incest has not intervened, but it constantly surprises me  how quickly  ancestors, starting with two grandfathers and two grandmothers, pile up. Most family trees, ignore the universality of genes and the involvement of women, who make an equal contribution to the gene pool, yet often, as far as the tree is concerned, lose their identity with motherhood.  They  tend to focus instead on one male ancestor and his wife and spread downwards into the present, picking their way along one particular line.  But try looking up and back from where you are, into  the foliage of the tree (and what the foliage hides),  and a different picture emerges. Names, which are not recorded, and lines of inheritance which are not acknowldeged, begin to emerge. It is into these dark corners that historians  and biographers should seek to cast a light.

A  French film called Micmacs appeals to me because its story is built round a gang of social drop outs who, using  all sorts of discarded products, create new, fascinating and useful machines. The fact that their creations are used to bring down some wicked arms dealers adds to the fun. But the message that every piece of so called rubbish has at least one additional use is one in which I share a firm belief. The films is directed by Jean-Pierre Jeunet who also made Amelie.

Quite by chance, while you were writing this post Elder Daughter, present for the somewhat truncated celebrations, was sorting through our tea-chest of photos dating back into the last century. Among them were sepia renderings of my paternal "greats" with captions written on the back by my father. Rather late in life he decided he'd allude to our family tree and I suppose I may do the same, even later. You don't imply these links have any emotional component for you. I'd have to confess mine don't for me. I wonder if this is a typical response. If not, what does it say about me? Simply that certain things interest me and certain don't. Ah, but should they?

No emotional content. At least I think not. I don't believe I liked or would have liked all the people concerned. But I do find the photographs fascinating particularly when seen as a collection. The faces stare at you out of a moment in the past. And you feel that there is incomprehension on both sides. Then I wonder what facial twitch, what gesture or tone of voice may have been inherited and passed on, eventually to me. I sometimes think of a remote ancestor climbing down from a tree and shading its eyes as it looks into the distance, or something even more remote, scuttling out of a rock, and wonder what I have about me that came from them.