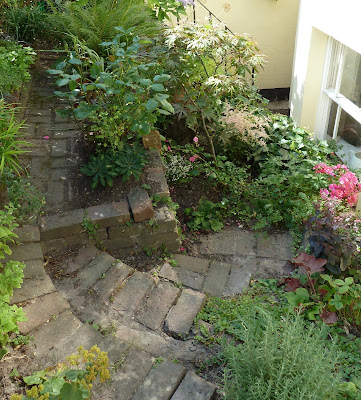 Our garden. Looking the other way.

Waiting at platform 1 for the London Train,  I hear an announcement that there has been a platform alteration. The Charing Cross train will leave from platform 2. An elderly man complains as we cross the bridge: "they never get it right. At least I don't have to this every day." We compare notes about commuting. "Coming back from London in  the heat was the worst," he says, "in the old slam door trains. I'm too old for this," he says. "At least being old means that you don't have to commute," I say. We settle down at different points on platform 2 to wait for the London train. When  in a minute or two, I hear the announcement that there has been another platform change and that the London train will after all leave from platform 1,   with other bewildered passengers, I make my way back over the bridge,  and look in vain for my new friend, but he is nowhere in sight. I find myself hoping that he is not preparing to throw himself under the train as a final statement of protest.

Train journey usually have something to offer if you look or listen closely enough. You don't have to be Sherlock Holmes to learn bout your fellow travellers. Today as I find myself sitting next to an accountant reading an accountancy magazine and opposite a comatose young man with a thin exhausted face and two studs in his left ear, one at the top and one on the lobe, I am ready to be disappointed. Until, that is, the young man pulls off his sweater, dragging up at the same time to reveal his bare torso underneath. When he quickly draws down his tee shirt, I note with interest that it bears the slogan "Rethink going bare in public". Having adjusted his dress he produces a name tag which he pins to his tee shirt. It gives his name followed by his job description: "make-up artist". Next to his name is the logo HN, which is shortly to be explained. Before long, he is on his mobile: "Thank you for your text," he says, "it was sweet of you. I don't like not being on holiday. When did I get to Hastings? ... And when did I leave? ... What is today's date?  I like where I am working, but things are dead at Harvey Nichols" (HN explained) "I had a nightmare. I was on a boat. All of a sudden the boat was sinking. You know I can't swim. I kept trying to keep afloat (sighs). "I can't wait to go on holiday again. I hope you don't mind coming to the Philippines.  You know I have friends and family there..."
Posted by Unknown at 5:45 pm

Commuter trains to and from London - a rich mixture of status quo (Some people taking weeks to read a paperback that has been folded into a multi-leaved tube) and oddities like the gentleman you have just described.

But the oddest things of all was a personally acquired skill, especially on hot days. An ability to fall asleep for exactly five stations and never fear that one might overshoot. Train movement plugged into - and possibly controlling - one's circadian rhythms.