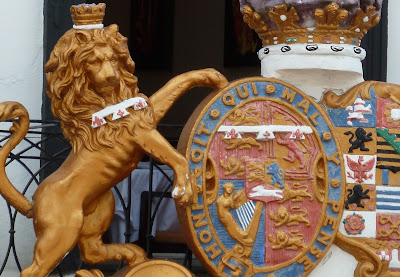 Mine. Queen Victoria  as a girl apparently stayed in the building in The Pantiles, now an Indian restaurant, where this coat of arms bears witness to her visit.

As a smoker, Heidi has become used to young people, particularly in London, cadging a cigarette from her when she is sitting at a table outside a bar or restaurant. This happens quite often London and in Spain, less often in Tunbridge Wells. As a rule she doesn't mind, but it can be annoying. So she hides her cigarettes and doesn't make a habit of responding to what seems to have become a legitimate form of begging. But to day, outside Pasta Pasta in St Leonards a young man stops in front of our table and says:
"You are smoking."
"Yes," says Heidi.
Silence.
Then after a pause, she says: Why?"
"I am from Czech Republic".
"I am from Germany."
"May I have a cigarette?"
Heidi hands one over.
"May I have a light?"
Heidi proffers a light.
"He's rather sweet", says Heidi, as strolls off, along the sea front.

From the train a flash of orange among the trees on the slopes of the embankment, upon which we are travelling.  An exotic bird? No, rather a couple of railway employees wearing the orange jackets insisted upon by Health and Safety regulations.