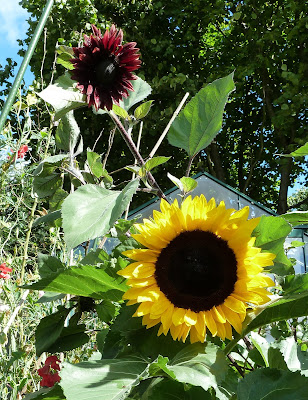 Bronze as well as yellow sunflowers have flourished this year despite attacks on the stems of the yellow ones  when they were about 2 inches high by a mysterious bird or other creature, which nipped them neatly in half, without any apparent attempt  or desire to to eat them. The bronze seedlings, the marauder left alone, but I had to defend the yellow ones with sticks and string and even garden tools, which I built into a pyramid above them. Just four survive but  the flowers have made up in size for their lack of numbers.

At this morning's morning glory count, I note no fewer than 14 flowers from the two plants which are  now sending their shoots all over the fuchsia. In  a larger garden, this would go unnoticed, but here detail is what matters.

Giuseppe's restaurant and delicatessen in The Pantiles had some flat, white peaches for sale the other day, which I meant to, but forgot to buy. When I go back today, there are peaches of  a more ordinary kind on display, but the flat ones seem all to have been sold. As I leave with two of the more usual peaches, I am greeted by Giuseppe. "Have you got some of the flat peaches,"  he says. I tell him that I have been unable to find any, where upon he rummages around and discovers a remaining flat peach. "Here, " he says and pushes into into my shoulder bag.
Posted by Unknown at 4:52 pm

Thank you for the glorious happy flowers and your evocative observations, as always.

A flat peach? Not a flattened peach? Are there gustatory differences or is it whimsy for an advanced chef? I do know about flat tyres.

BB Flat is what Guiseppi calls it. It is a variety that looks squashed and indeed flat compared to the more common spherical variety. The taste is worth any etymological problems which it may bring.

Here in the States, the flattened/flat peaches are called donut (doughnut) peaches because of their shape...and they are delicious!

Always learning something new - never heard of 'flat' peaches before! My favourite fruit, by the way.