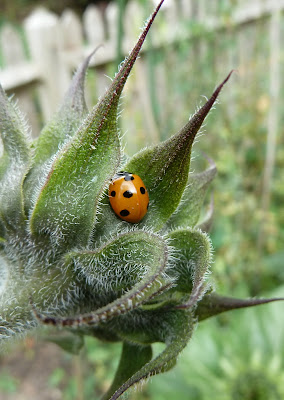 Ladybird on  a sunflower bud. Lots of ladybirds this year, some of which have appeared here, and lots of sunflowers, too. Un embarras de richesse.

If you do that , you'll end up getting in trouble with the police," says a grandmother to a little girl. The little girl is walking by her mother who is pushing a pram with a baby in it. "Do you want that," says her grandmother. "No," says the little girl. As I walk away, I turn round to see the grandmother bend down to put her arms round the child.

Yesterday sees the last page of the notebook which I opened in January of this year. The new one opens today. I see that it is number 10 in the stack of  similar books on the table beside my desk. When I look back I find that  annotations have become neater and more ordered. And there are now fewer drawings. Still missing are dates. Very rarely is there any indication of when  notes were taken or drawings made. Almost useless if I am trying to trace anything! I didn't want and don't want a diary. But clearly I should resolve to include more dates.
Posted by Unknown at 6:26 pm