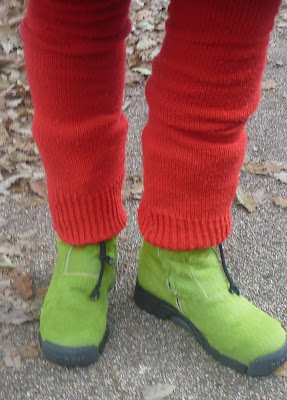 Boots and leg warmers which help me to identify Heidi without raising my eyes far from the ground.

Although I do not smoke, I do not endorse those whose puritanical hatred of the habit, exceeds the bounds of civility and moderation. Political correctness has always reeked of incorrectness to me, whose idea of freedom   may sometimes appear quite close to the subversive. So at any rate I feel this morning when I see a young man instructing a young woman in the art of inhaling. "Put in in your mouth", he says as she takes a cigarette, "and breathe in while you're doing it." It could of course have been marijuana, but the circumstances in the middle of a path in Calverley Ground, suggested tobacco. Either way I admit to a sneaking feeling of support  for such acts of rebellion.

Through the attic window of a house, I see from the road,  a skylight, and through the skylight, the sky. Two views for the price of one.
Posted by Unknown at 4:54 pm

Asa former smoker I must say I am horrified that anyone would see encouraging another to learn how to inhale tobacco smoke as an admirable act of rebellion. Hving watched several friends and family members die painful frightening
deaths gasping for air tethered to a ventilator and/or oxygen tank, I see this act
as an act of assisted suicide. This has nothing to do with being PC, it has to do with life and death and heath. The one urging the other on is the exact opposite of a friend.

CC And now I must admit to a sneaking feeling of guilt. I have never encouraged anyone to smoke and wouldn't. Two of our neighbours recently died of lung cancer; and not that it's relevant, but neither was a smoker, which perhaps contributes to my insensitivity.

We love Heidi's leg-warmers and boots! A video of them walking please!

I am seriously envious of those boots and leg-warmers!

I remember working quite hard at learning how to smoke. I worked in a prep school for a short time, and the matron, a former nun, would ply us, her assistants, with mild cigarettes. 'Go on' she would say,'they're so mild, you won't even feel it pull as it goes down!' Smoking has always been an act of shared escape, bravado, rebellion, if you like; even the last school I worked here there was a small room set aside where smokers went, and I remember one of them, a pregnant teacher, saying she didn't want to stop because she vastly preferred the atmosphere (social rather than gaseous) in there to the smoke-free larger room. The tobacco companies must be very happy that this sense of camaraderie of course, as must be the makers of carbon-proliferating outdoor patio heaters!