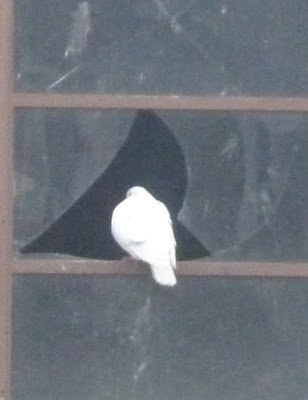 Whenever I walk up Mount Pleasant and pause by the traffic lights opposite the abandoned cinema, I often consider  taking, and sometimes do take, a repeat photograph of the pigeons, which now inhabit the upper storeys of the building. The broken glass of the windows presents not only a way in for the pigeons but a frame in which to profile them. I sometimes think that  I and the pigeons are probably the only creatures who will not welcome the demolition on the building when eventually it occurs.

As I make make my way through Sarah Bakewell's new  biography of  Montaigne, I find myself drawn into a web of strange connections. The book is called How to Live and sub-titled "A Life of Montaigne in one question and twenty attempts at an answer". The attempts are  summarised in chapter headings which draw on the essayist's observations, often quirky, often surprising and sometimes contradictory.. The answers draw on Montaigne's stoical and sceptical philosophy. They range from "Don't worry about death" to "Be convivial: live with others"; from "Be ordinary and imperfect" to "Wake from the sleep of habit";  from "Keep a private room behind the shop" to "Question everything";  from Do something no one has done before" to "Live temperately".
The connections which I have found are curious and may be revealing. When I chose Plutarch as a pseudonym and model for Now's the Time, I had not seriously begun to read Montaigne and I did not realize that Plutarch was his favourite writer and in some respects model. The more I read Montaigne now  the more I find in him attitudes which I have consciously or unconsciously seen evolve in myself. Before I started to read Montaigne I read nearly everything written by Flaubert, including much of his correspondence. It is Flaubert who writes of Montaigne: "Don't read him as children do, for amusement, nor as  the ambitious do, to be instructed. No, read him in order to live." I think that it was because of Flaubert that I began to read Montaigne. It is no coincidence that Sarah Bakewell's book begins with the reflection that much of the confessional habit found in 21st century blogging can be traced back to Montaigne's introspective style.

In Hall's bookshop I come across a big stack of  the little Penguin Classics which fit neatly into an envelope. I have taken to sending them to people instead of cards. Two titles chosen at random  testify to their variety: Boule de suif by Guy de Maupassant, perhaps the greatest of all short stories, and some recipes by Elizabeth David, the most distinguished of food writers, called I'll be with you in the squeezing of a lemon. At 30p each they cost less than the average post card but by and large are better value. I buy an armful, which I take home ready to bestow as tokens  of esteem or affection upon those I love.
Posted by Unknown at 4:35 pm

I'm interested in your phrase "the confessional habit found in 21st century blogging". At what point does a personal disclosure become a confession? The dictionary is quite startling on confession: acknowledgement of a fault, revelation of a private nature, a formal or written acknowledgement by one accused of a crime. These are serious matters. "Confessional habit" removes some of the sting-by-association but not completely. Some kind of defect is implied. If I admitted to an unexpected (for me) enthusiasm for Margaret Drabble novels I would, to use a now over-worked metaphor, probably be under the radar. Switch Margaret Drabble to Agatha Christie and I might move closer to a confession.

I may be splitting hairs. I think your phrase covers revelations one might not make to someone over the table in a pub but one might - fascinatingly! - publish for consumption by thousands of faceless individuals. What previously required the hint of a fault is now accepted as merely a secret.

The willingness to reveal oneself to thousands deserves scrutiny. Certainly I've done it (Is "been guilty of doing it" more appropriate?) mainly regarding opinions and judgements. I have in fact occasionally deleted whole posts as the cold sweats have got to me. I can't justify this but perhaps a desire to take risks explains it. And have I now confessed?

Just to let you know that there is a new, revised, e-book edition of "Lunch with Elizabeth David". The novel involving David and her mentor, Norman Douglas, originally published by Little Brown, is available in all e-book formats and can be sampled at http://www.smashwords.com/books/view/29680
It is also in the Amazon Kindle store.

You're right. The dictionary is surprisingly rigid in its definition. Perhaps I can get away with a metaphorical intention. I intended to refer to the habit of talking about oneself and one's feelings in an open and uninhibited way. Perhaps the presence of psychoanalysis has, meanwhile, opened up people's readiness to make admissions of their weaknesses and failings, not always in an honest way, sometimes even in a melodramatic way.
No I don't think you are splitting hairs, but I am stubbornly persuaded to stick to the term, (where I there are I suspect ironic residues to be mined) though if I were repeating the thought I might look for another word.