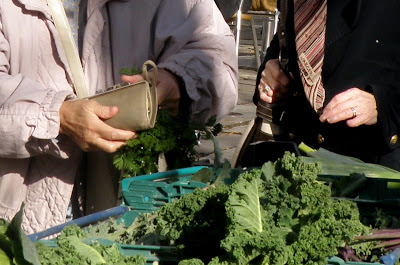 Hands shopping at the market.

Above the rooftops I hear the cry of gulls, a sound that it is hard to separate from the sea. But seagulls venture inland more than  they used to, it seems. Here in Tunbridge Wells, it is the tip on the North Farm Industrial Estate, which seems to attract them rather than the sea and the fish in the sea or on the quayside.

What a wonderful thing is the blogosphere. This morning I read about  kudju in a comment on Barratt Bonden's blog Best of Now. What is kudju? It is an invasive weed imported into the USA from Japan. It has become rampant in the south eastern states, where it has earned a reputation as something difficult to eliminate. I would not perhaps have bothered to google the word, if it were not for the opening lines of a poem about the weed, quoted in Julia's comment. The poem is by Beth Anne-Fenelly  of whom I had read nothing before. Bur I am pleased to have remedied the omission. I have now read (or heard  the author read) the poem. I can't get the   image of the opening lines out of my head. So here it is again: "Kudju sallies into the gully like a man pulling up a chair where a woman was happily dining alone." No doubt about its presumptuous qualities.
Posted by Unknown at 5:04 pm

The gulls' cries are their side of the battle in the Great Wheeliebin Offensive which began (to my knowledge) in Dover and Folkestone and which is forcing them further and further inland. Herefordshire Council pooh-poohed the idea that they might turn out to be a threat but sure as heck, as a Folkestonite of my acquaintance predicted, they did and Hfd too has gone wheeliebin.

Julia's quote is one of those marvellous things about blogging- you never know what will end up in the net you cast out with hope.