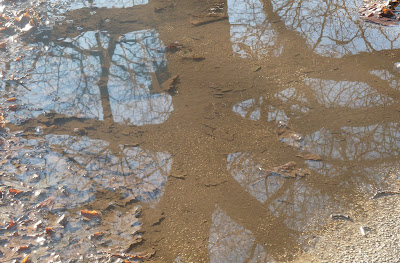 Oak tree in a puddle in the corner of The Grove where a drain has overflowed.

Chris who cuts what remains of my hair tells me that his Christmas dinner was almost eaten it its entirety by his dog, a whippet/collie cross. The dog leaped upon the loin of venison when backs were turned and the joint was waiting to go in the oven. We got there just in time. He ate only a inch of so  into it, about as much as we would probably have given him any way. "We heard some gulping noises," Chris says.  What bliss for the dog though!  For a few brief moments he must have thought: "this explains the fuss about Christmas."

In the shop a telephone rings. Still not used to my Blackberry. I clasp my hands to my pocket. "Is that mine" ? I say not with out a surge of hope because scarcely anyone has my mobile number. It turns out that it isn't mine. "These days phones seem to ring everywhere," says the shopkeeper. And he's right. I think of a universe where swarms of smart phones, having taken over Earth,  have started to explore interstellar space, ringing among the galaxies, as they go.
Posted by Unknown at 4:45 pm

Oh! For a moment I thought I was on Marja-Leena's blog! Is that a photograph or a print? Lovely.

I'm flattered. It's a photograph. I just pointed the camera at the puddle, as one does.

About to write how I love your photo, Plutarch, and find my name here. I'm flattered too.