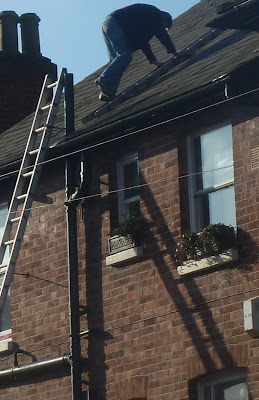 Two ladders and the shadow of a ladder.

"I didn't mean to call you up," says a very precise woman's voice when I answer the telephone this morning. There is that curious hiatus which sometimes occurs when a wrong number is called. It is prompted perhaps by a sort of curiosity, about whom is talking to whom, and even a fleeting desire to begin a conversation. Having recently dialled a wrong number myself, I am more than usually sympathetic. "I'm calling the Halifax Bank," says the voice. Unfortunately that piece of information leaves me with no openings. The Halifax Bank is something ,which  even if I had an identity crisis, I would still know for certain that I am not. So I have to concede that the number she is calling is the wrong number. Two voices return to the ocean of sound on which they float.

"The blood tests are fine, all the tests and the x-ray is OK. You can go home," says the A&E registrar at the Kent and Sussex Hospital. That is the good part of my four hour visit to the hospital. The bad part  is for Heidi who discovers  me keeled over on the floor yesterday morning and rings for the ambulance. I have had  no worrying symptoms apart from a sudden feeling of nausea following a streaming cold yesterday, and could only have been unconscious for a minute or two. The unexpected is at least interesting. The A& E department could not  be more efficient or kinder, and, although I have no book with me, I don't have time  to be bored. Another good part is the visit, just before we leave, from the hospital chaplain, a  gentle lady, who realizing that spiritual sustenance, is of little help just now, brings us a cup of tea. "I double up on these duties", she says. " And adds, gripping my wrist, "don't lose your faith.".
Posted by Unknown at 11:17 am

Oh, Plutarch, what a shock to read about your faint and emergency visit. Certainly hard for Heidi! Glad you were well taken care of and you are OK! Strangely, my first thought was of that man on the roof looking dangerously ready to fall off and end up in the hospital - was that an intentional image choice?

All my very best wishes to you and Heidi.
What a scare. So happy you are OK. Please
see to it you stay that way!
Love the Chaplain with the tea.

I'm de-lurking to wish you the best. I visited a hospital yesterday myself via ambulance, so I understand the wonder and worry of it all.

Enjoy a cuppa with me from Portland OR US

Glad you're OK. Nice story about the chaplain. I could just imagine it. X

Glad it all came out well. Nausea is a frequent visitor Chez Bonden, though usually for easily identified reasons, the sight of Bruce Forsythe for one. Lacking a book you must have felt worried about lapsing into vulnerability and I'm glad they kept you occupied. Perhaps one should consider a neck-strap attached to the Kindle; whither though goest... You make no mention of your response to the chaplain. I wouldn't have wanted to offend her but I'd have needed to feuilleter a little to come up with something I have faith in. The genius of James Joyce? Ah, I have it: certain friendships.

Thanks, all. Heidi is slowly recovering. The entire experience was worse for her than for me. Despite there being no book or Kindle, there was much to watch. The chaplain was charming as well as kind. I was at pains not take her offer of tea for granted thereby treating her as a tea lady. In many respects she restored my faith. In human nature. I omitted to say that the doctor shook hands before we left, which I have noticed that doctors tend to do nowadays.

Oh dear, I've only just seen this! I do hope all's well and you've been able to enjoy T's visit today without any further funny turns (we don't include Bruce Forsythe in that description).

Poor Heidi too, what a worry. Hanging around hospitals is often quite as debilitating as the original reason for being there. Have a good, relaxing and restorative rest of the weekend.

All better now. Champagne followed by beef and Burgundy and good company have served as a cure if one was needed. BB was closer than perhpas he thought. No sign of Bruce Forsythe has ensured the dispersal od nauseous symptoms.

Plutach! Hope you are feelng better now and Heidi's pulse rate is back to normal.