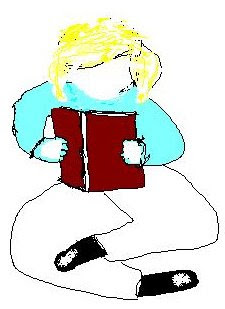 Another tablet drawing on the subject of reading from the archives.

The smell of marmalade cooking is almost better than the finished product. It is sometime since I have made any, but I  relish the process now taking place. To my mind there is no better method than the whole orange system recommended by Jane Grigson. You cook the  fruit in water for about one and a half hours until the skin pierces easily. Keeping the water ready for the next stage, you chop the cooked fruit as fine as your taste calls for.  To retain the pectin, you then put the pips in a muslin bag, which you tie to the side of the saucepan. And finally boil the marmalade until setting point is reached and it is ready for bottling.

A shopping bag woven of some glittery material has moved across The Grove in the last few days, as though taking a leisurely tour. First it was on top of a rubbish bin near the Sutherland Road entrance to the park. A day or so later it was hanging from high up in the branches of a tree, where doubtless some energetic young person had hurled it. Today it has descended and rests on top of the rubbish bin next to the Belgrove entrance
Posted by Unknown at 5:08 pm

Would like to see a photo of your completed marmalade. Saw some small jars of blood orange marmalade in the local mall around Christmas time, but I put off buying any, thinking they'd still be there when I returned. Only, I didn't return.

Perhaps the BBs will take a marmalade tour: Lucy was at it a week or so ago, now you. Mrs BB made it several years running but it doesn't fit either of the meals each of us - rather loosely - identifies as breakfast. We ended up giving much of it away. Reflecting on that previous sentence it occurs to me I would never ever consider having marmalade at any other meal than breakfast whereas jam has greater adaptability.

I would send you a jar, Crow, if there were a practical means of ensuring that it arrived safely.

I agree, BB, marmalade is for breakfast. Much of ours will go to neighbours. Heidi used to like all sorts of jams for breakfast and accepts marmalade only as an oddity among preserves. For my part I can tolerate no preserve other than marmalade when breakfasting properly. Alas, we niether of us do that any more. Fruit and porridge is our spartan fare. I realize that I made the marmalade only because I like making marmalade. I have no regrets.

A photo of a jar labelled in your own script would be a proper substitute.

We have something referred to as an English muffin over here, though I imagine it isn't what you'd recognize as such. Be that as it may, a friend gave me a jar of imported (so said the label) orange marmalade made in England. Some of the most toothsome stuff I've ever eaten, even if I did smear it all over those questionable muffins.

I like marmalade atop a bit of strong white cheddar on water crackers. With a smoky oolong.