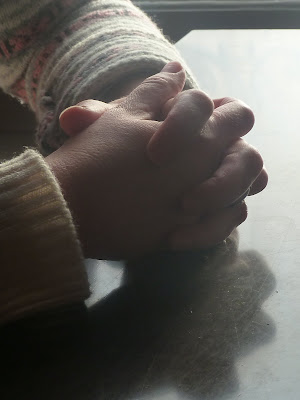 Last year it was feet. This it's year hands.

Every scrap of the turkey has now been eaten. Risotto as usual, a salad of cold turkey with various chutneys and soup as ususal. But a new left-over dish proves equally succesful: turkey hash. A mixture of white and brown meat is finely chopped;  sliced onion is softened in butter and the turkey added and slowly cooked until the butter is absorbed. A little stock is then added and and cooked slowly and cream and seasoning added to make a sauce. Meanwhile mashed potato is lightly fried until a golden brown and arranged  in a dish round the creamed turkey. You  can of course make hash with almost any left over meat. Or perhaps, though I have not thought of it until now, with left over fish.

At lunch in a restaurant yesterday Heidi who has popped out for a smoke returns indignant."There is a little dog outside shivering in the cold," she says. The dog belongs to a family eating away in  the warmth. Instead of ticking the family off, Heidi collects the dog and the bowl of water beside it and brings them into a covered lobby at the rear of the restaurant, where she re-tethers the poor animal.  No dogs are allowed in the restaurant. After quite a while the pater familias rises to see how the dog is getting on. When he sees that it has gone, he goes round to back, walks straight past the dog which he fails to notice, and goes into the car park where he begins to call the dog, assuming that it has run off. We are still laughing when he returns only then to notice the poor creature, who greets him with an unenthusiastic wag or two of its tail.
Posted by Unknown at 12:53 pm

Congratulations to Heidi for helping the dog.
Why people can't walk their dogs, return home and then attend to shopping or other errands is beyond me.
But then again, there was an incident here recently where 2 small sisters were left unsupervised and Mum went ballistic towards the resident adult who had requested the girls to SIT in the chair in which they were wrestling and causing a ruckus.

I'm not sure we've ever had a turkey, even in the USA though I have obviously eaten it at other people's dining tables. But the hash sounds like an excellent proletarian ending for the beast. Is onion sufficient to give it pizzazz? Mrs BB has a tendency, thoroughly supported by me, to add a tiny bit of chopped chilli to all sorts of dishes these days (eg, bolognese sauce). The trick seems to be the tininess of the amount, creating just an echo rather than up-front spiciness.

Bravo to Heidi, a big hug to her from me for that. Horrible people. Mol gets a hot water bottle and extra blankets in the car!

I like that stage of any fowl - I tend to think of it as fricassee, probably incorrectly, and to serve it with rice, but the mash sounds grand. When I am feeling particularly idle and decadent, condensed soup can be brought into play...

BB Like Mrs BB I have been adding a bit of chilli to lot's of dishes in the last few years.i like your phrase "an echo of spiciness". I didn't on this occasion, because I wanted the slightly gamey turkey taste not to be lost.

Mol must love her hotwater bottle. I find a similar comfort in this old fashioned device, when cold or down-hearted.

Joyce and I say well done to Heidi for brave kindness of heart!