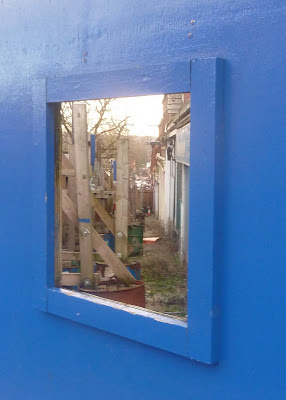 Mount Pleasant is the street which leads down from  the Civic Centre and the main shopping area of Tunbridge Wells to the station. It is itself a busy road the prospect of which is damaged by the site of the former cinema and the shops which flanked it. The cinema has now been derelict for about 10 years and the shops for not quite as long. At first the shops like the cinema itself were simply boarded up, but before long graffiti and broken glass in competition with encroaching weeds and other invasions meant that the frontage of the cinema (on the corner of Mount Pleasant) and the shops on either side, had to be separated from passers by. Hence this blue hoarding, which decorated with photographs of the town in former days, is now in position at ground floor level. This "window" in the hoarding strikes me as resembling a picture. If it were a picture, it would be called Nature Takes Over. On the other side of the hoarding the pavement is properly maintained and life goes by as usual.

In The Grove the sun, low in  the afternoon sky, shines through a street lamp which becomes dazzlingly bright,  much,  much brighter than ever the usually dim yellow bulb would allow. Seen from the other side all there is to note is a  pale, rather dirty pane of glass.

There is  a small fashion shop in Grosvenor Road. In the window this morning a notice reads: "Due to our creative team we are closed today..."
Posted by Unknown at 4:35 pm

These three pieces of writing and the photo all reveal what lies beyond the apparently bland surface of reality. It is like taking a step into another world that is more real than the real. Great post.

Love the "Potempkin village" aspect of
the photo. And for that matter of the other
pieces as well. Something else going on behind the facade.

I am presently reading Sinclair Lewis's Babbit on my Sony and there's a resonance. Babbit, a realtor in a US town called Zenith is a member of the Elks all of whom engage in "boosting" Zenith. Ninety years after Babbit was written Hereford has taken up the practice. When the number of empty shops in Hereford rose to embarrassing levels the city council took to papering the windows of vacant properties in prominent positions with scenes of Hereford in happier times together with slogans that prove rural isolation is no stimulus for pithy wordage. I would have expected greater sophistication in TW.