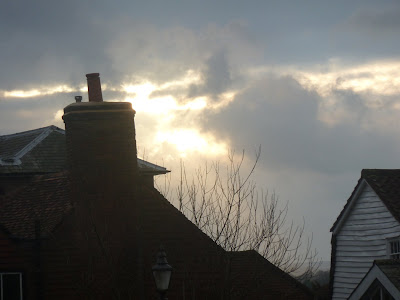 At this time of year, you often catch dramatic sunsets when you look in westerly direction over the rooftops of Mount Sion. Between the sloping roof and timbered wall to the right of the photograph there is a glimpse of the heath area known as Ashdown Forest.

The two series of piano pieces by Erik Satie called Gymnopédies and Gnossiennes are on my mind.   As I go about the house, they seem to track the vestiges of a cold and wet Winter. And a little of the turmoil of history unfolding beyond the fortunate confines in which we live, They are connected in style and impact by their mild dissonances and floating melancholy, which were not wholly appreciated when Satie wrote them at the end of the 19th Century. The word Gymnopédie refers to an ancient Greek dance and draws on  lines from the poet T P Contamine de Latour
"...where the amber atoms in the fire mirroring themselves
Mingled their sarabande to the gymnopédie."
Satie it seems invented the word Gnossienne. It refers to Knossos in Crete and by implication to the myth of Theseus, Ariadne and the Minotaur.The direction for  Gnossienne 6 sums up much of the strangeness and attraction of all these pieces. "Avec conviction et avec tristesse vigoureuse". The idea of a vigorous sadness is not unappealing.

They say of Montaigne that  the more you read his essays the more you discover yourself in them. Writing of  the power of imagination he says:  " I catch the disease that I study." That's me all over. Tell me about symptoms and I instantly develop them. I am not a hypochondriac only because I  keep my imagination strictly in bounds, and make a point of banning symptoms from  my conversation. It is reassuring to know that someone writing five hundred years ago should so precisely have anticipated my own peculiarities.
Posted by Unknown at 5:11 pm

Satie came up on University Challenge the other night; apparently he had a penchant for odd musical directions, such as 'do not put your head under your arm when playing'!

Banning symptoms from conversation really must take an iron will...

Another direction from Satie: "slow, with astonishment."