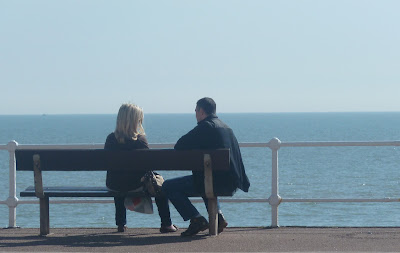 Same bench, different people, different year. I find myself taking the the same photograph year after year, more and and more often. And the more I do it the more I like the idea of monitoring the way things and scenes, wear and modify, fade and evolve. The restaurant where we sit in St Leonards-on-Sea, looks across at several benches, which provide such benchmarks. More bench photographs will follow. Watch this space.

Outside a pub a man with a thin ferret face fixes his eyes in  his laptop screen as though it frames a living prey upon which he will shortly pounce.

In The Grove  a pair of magpies  hop about under the trees collecting in their beaks twigs for their nest.
Posted by Unknown at 1:50 pm

Lovely composition in that photo.

I'll never get tired of these kind of scenes. St Leonards-on-Sea seems to be a favourite place of yours, a nice retreat not far from home, I would think.

I suppose the ferret-faced man's expression may be predictive. When our broad-band subscription runs out in future, our ISP may not be satisfied with a mere warning but may have the means to unleash something punitive from the laptop's screen. By then it will be a legal obligation to be online and those who briefly fail will be identifiable by a capital M (for medieval) branded on their forehead.