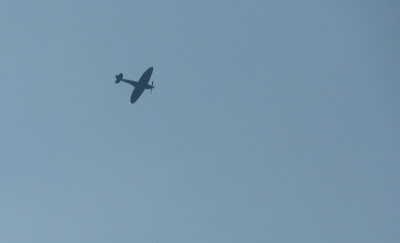 Above Groombridge Place, the other day I point the camera at a lone, vintage Spitfire. Other newer one must have flown in the same patch of sky a long time ago. This one seems  slow compared to those which I remember when I was  a nipper of seven or eight.

A pigeon busies itself in the wisteria on the wall of the house opposite. If last year is anything to go by, it is building a nest and will doubtless in due course do the same in the wisteria over our front door. The nest remains. Its outline can just be detected through the opening flowers. Last year pigeons commuted between the two wisterias.

The giant oak in the north west corner of The Grove is in leaf - a pale, yellowy green; and with the leaves, little catkins have appeared. Catkins strike me as inappropriate adornments for such  an oak. Too small and delicate.

More trees than you think have catkins.

BB You're right of course. A new one wouldn't be an affront.

Lucy I am particularly drawn to silver birch catkins. They are of course spikes of flowers,arn't they?