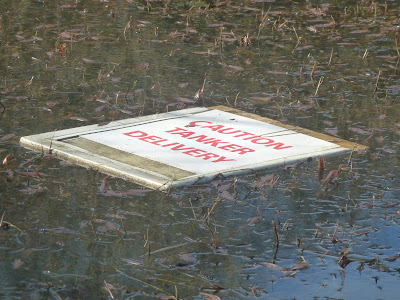 Warning in pond on the edge of Tunbridge Wells Common makes me think of Beowulf and Grendel's mother whom he pursued to the bottom of a lake.

"Is that crab? I am just going to have a discrete look" says George outside the pub., as a plate of food is delivered to a neighbouring table. He is a man who cares about gastronomy. "Not crab, Yorkshire pudding!" he says despondently after a brief recce. How can a crab look like Yorkshire Pudding? Well, there's crab and there's Yorkshire pudding. And never the twain shall (or should) meet.

Between two trolleys in the supermarket there is a narrow gap just, but only just, wide enough for a third trolley. It reminds of the days when I used to drive to work - I was the worst and most vicious of road hogs, I, as an ex-driver, now admit. With great skill I negotiate Scylla and Charybdis, and neither of the trolley drivers so much as notices the centimetres between each of the trolleys and mine. The feeling of achievement, small an unnoticed as it was, still hasn't worn off.