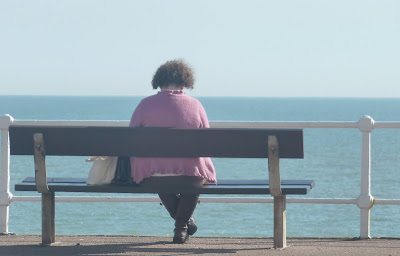 Bench occupied.
Dinner with some neighbours, who announce that they  have just buried the ashes of their respective mothers in a cemetery in Ashord.  The urns containing the ashes had remained on top of a wardrobe "gathering dust" for 10 and 12 years and they thought that it was time to say goodbye.
In the sun, a pint of Harvey's and a scotch egg at The Black Pig.  The egg is garnished with deep fried shredded onion. While we are eating, the pretty young waitress inquires: "How are you going, guys? Can we get you guys anything else?" Before we leave, she urges: "Have a nice day, guys". This form of address to men and woman alike, has apparently migrated from the USA. Our waitress has  no hint of an American accent.
Posted by Unknown at 4:54 pm

Though not personally responsible, I'd like to apologize to "you guys" for our wayward
slang form of address having washed up on your shore. ;~)

I daydream about a quite different conclusion to your meal had the pint of Harvey's not been ale but Bristol Cream Sherry.

cc We guys are becoming quite used to the term.

BB It took me some time to remember that Harvey's is also the name of a sherry shipper and the inventer of Bristol Cream. It's quite a thought.