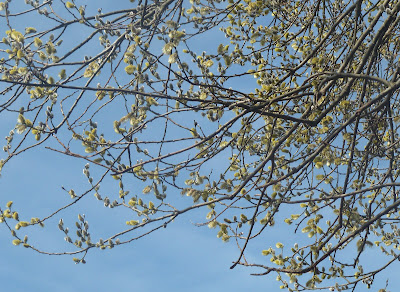 I was once met a girl called Catkin. That was more than 50 years ago. So I may be forgiven for forgetting what she looked like, but not  for remembering her name, which was Catkin  Hazel. Or do I imagine it? Perhaps it was Hazel Catkin? Or perhaps I invented all or part of  it. These are not hazel catkins I know, but they prompt the memory nevertheless.

"Did you enjoy it," says the surgeon of the operation which he has just performed on an inguinal hernia. It took place under local anaesthetic, and I didn't feel any discomfort let alone pain. My frame of mind was  however modified by a powerful tranquiliser, which may have disposed me to a certain lightness of heart. But enjoyment? Not quite. "It was interesting," I say. And indeed it was.

During the few hours I spend in hospital I read a memoir by the late Tony Judt,  the English born historian, professor of European studies at New York University. A passage, which  I now refer back to and note, touch on a familiar confrontation of youth, in which he acknowledges his debt as a student, to a tutor, John Dunn. "It was John who -  in the course of one extended conversation on the political thought of John Lock - broke through my well armoured adolescent Marxism and first introduced  me to the challenge of intellectual history.  He managed this by the the simple device of listening very intently to everything I said, taking it with extraordinary seriousness on its own terms, and then picking it gently and firmly apart in a way that I could both accept and respect. That is teaching" Judt  concludes, and I silently applaud.

So glad it's all done and dusted, and was, if not enjoyable, interesting!

Mind how you go.