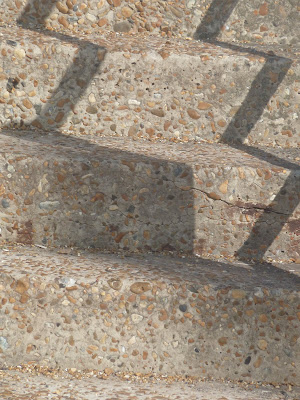 The shadow of railings.

Google Mail's automatic trawl for words to be linked to advertisements, as I have noted here before, extends even to its own mechanisms.  In the case of spam which it for the most part successfully separates from bona fide emails, it manages to allow the manufacturers of Spam luncheon meat to come up with the following  pop-up recipe headline: "Spam Swiss Pie: Bake 45 -55 minutes until eggs are set." It is in a separate window but that's what I call spam.

From the train I see from the window the network of playing fields where two weeks ago I watched my two grandsons play rugby and saw the occasional train pass against the skyline. I have always suffered from an irrational desire to be on a passing train when I see it from a field, and in the field when  I pass  it in a train. Today both wishes, though not simultaneously granted, at least edge closer together.

There's been an attempt recently to rehabilitate Spam from the depths of derision it fell into immediately post-war. But there's only one way back and it's not a world-beater. If someone were to place a Spam fritter on a plate between me and the keyboard, now, at this moment, I dare say I could persuade myself to eat it. Passive acceptance, you might say. Any other project requiring the slightest effort (eg, mentioning it subliminally, while drunk, lying on the couch, to Mrs BB) would never get out of the starting blocks. Although I'm almost tempted to buy a tin, open it, and check the smell with my eyes closed just to see how close (more probably how distant) that smell is to anything else claiming to be meat-based. This impulse is not particularly strong; I doubt I'd change aisles in the supermarket to bring it about.

After Hurricane Betsy, in 1969, when the National Guard brought food and water to those of us stranded in high waters, one of the best things they gave us were canned Spam patties. The tins held a half-dozen or so perfectly round patties of chopped pork meat (so read label), but we all knew it was Spam. It was delicious.

The powdered eggs, however, they could have kept: made terrible scrambled eggs, and anything else made with them (such as cornbread) smelled just plain awful. We were hungry (and grateful for everything else) but picky about what we ate, even if we had just survived a hurricane.

I bought a tin of spam recently for old times sake. It wasn't at all bad. That ad had come up again and reminded me of it.

Various vegetarian soya based products are not dissimilar, I've observed. Mum used to say if you gave the cat a bit of wartime sausage and it ate it it might just have some meat in and be worth eating.

Interesting that other poor quality meat amalgams gave their name to worthlessness; balloney for example (originally bologna sausage, and check out the history of Sweet Fanny Adams, soldiers' black humour from a very early date!