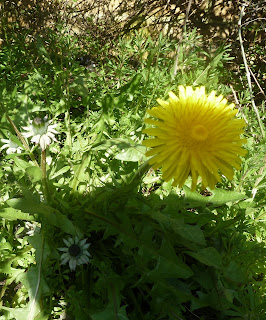 Early dandelion. I know  that they are a trouble on lawns. But when they pop up in odd corners, the complex structure of their flowers, star shaped buds and toothed leaves (dents de lion) are always welcome. Never more so than in a much longed-for spring.

Until today, which promises to be warm, leaf buds and flowers open slowly whereas in previous years the sudden appearance of the sun has produced an explosion of green leaves and  the white and yellow flowers of spring. Slow is good in an age of speed and urgency.

In the doctor's waiting room, a lady of my own generation and frame of mind comments on how waiting rooms often  present the only opportunity to read the Daily Mail and Daily Telegraph. She must  guess by my appearance that I am not a regular reader of cconservatively inclined newspapers. I am little flattered and a little surprised. I realize that she likes to talk and comes from a background where good talk is natural. In the space of about 10 minutes I learn a lot about her. She is a school teacher, married, until she was widowed a few years ago - to another teacher. She says that she wants to move from the country to London, where she can visit the theatre and art galleries, but which means "down sizing". She says that she has too many possessions. She doesn't want to sell them, rather to give them  away to  people who will appreciate them  - a principle which I agree with.   It is a shame to abandon her mid-conversation in exchange for routine medical discussions with a doctor.
Posted by Unknown at 11:16 am

I've never tried to discover the roots of pissenlit feeling they would never live up to the scatological suggestiveness of the word as seen by an Anglo. Nor can I ever imagine a salad based on the flower's leaves however youthful; their bitterness, experienced via the carelessness about where we put our hands as children, seemed intolerable.

The conversation sounds fascinating but I'm assuming you were the only two patients waiting. At Belmont Medical Centre the lady would have been entertaining a whole crowd. But then residents of TW are probably better at pretending they aren't overhearing one's conversation.

Dandelion leaves are a diuretic. The leaves of the plant when it is to be used for salad are blanched by excluding light from them, which makes them less bitter. The conversation took place in the surgeon's waiting room. No other patients were present.