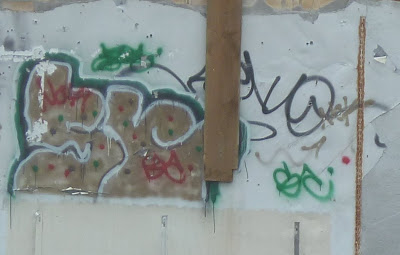 A wall behind the abandoned petrol station between Sainsbury's car park and the London Road. I stop to take a series of photographs from the footpath beside the car park entrance. It proves a fruitful couple of minutes.

There are now two areas of grass which are allowed to grow uncut and wild in The Grove. One is in its second year of deliberate neglect and already there are signs of interest. In particular a majestic clump of docks appears among the  sedges and feathery grasses. Gardeners uproot this plant which is seldom is seen as handsome or appears and renowned only as cure for stinging nettle stings. But allowed to flourish on its own, with its big leaves folding away from the centre, it deserves a word or two here.

Though I forget much I find, as someone who enjoys cooking, that I remember the likes and dislikes of people, even people for whom I have never cooked and for whom I am never likely to cook.

I really don't like andouillette (or andouille come to that). And what's more, I'm glad I don't like it, because if I liked it I'd have to eat it!

I too dislike andouillette. And there are very few things which I dislike. It's off the menu!

I may have some visiting cards printed: