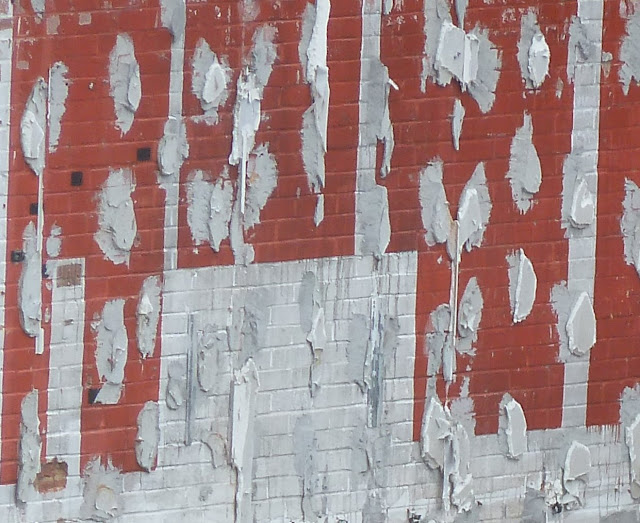 This wall borders the site of an abandoned petrol station near Sainsbury's car park. It strikes me as a feature which, if it were produced as a result of deliberate thought and action, might in some quarters be taken seriously as a work of art. (Click for whole photograph).

Two pigeons arrive on a hedge where there is a "To Let" sign. One sits on top of the sign, the other squats on the surface of the hedge. The one on the sign nods its head up and down as it peers about it. Pigeons often make me laugh. These are no exceptions.

Outside The Compasses Geoff tells me that house-flies take off backwards. This is new to me, and intriguing. He says that their front legs make it impossible for them to take off forward. It is also believed that they have evolved the habit because predators tend to approach flies head on. Reverse lift-off apparently fools enemies.  If, as friend or enemy, you want to catch a fly you should therefore come at it from behind.
Posted by Unknown at 5:28 pm

I thought you were about to say the Pigeons appeared to be evaluating the property. I love Pigeon behavior too. One of my favorites, in the park what I call "Randy" Pigeon chasing after a female, tail down and anxious to show her his etchings. ;~)

In the current climate for installation art this photo stands on the cusp between reality and artiface. Joyce thinks it also looks quite "crazy" which adds to the effect.
"ruskinvi" word verification