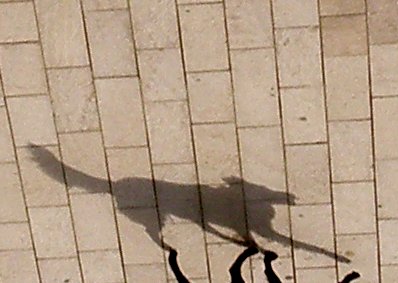 Last year (or was it the year before?) I began to turn photographs where shadows were involved upside down so that the shadow became more significant than the substance. The background provided by the closely laid bricks on the sea front combined with strong sunshine make it hard to resist repeating the exercise.

With the waves breaking in white horses a kite surfer arrives on the beach, the wind directly behind him. There are rocks to the left of him and no means of returning the way he came.  One the sand he folds the giant kite, the harness and control lines, packs them up and walks  dejectedly back along the sea front.

As the sun is setting a man is dancing at the edge of the sea. He holds a iPad above his head and using its video facility  appears to be making a movie of a woman in a red dress posing in front of the breaking waves.

The ninth and latest story in One Fine Day has just been posted. It is called The Electricity Dragon.

You must forgive me: your short stories spill out and I can rarely given them the responses they deserve. It's not at all like commenting on a conventional post. But one thought recurs and it's ironic since something similar occurred to you when I was writing GT. The gentle, deliberately unforceful, slightly laconic style of your posts seems much more appropriate to your short stories. Has this occurred to you?

Joyce loves these photographs. The shadow of the dog seems to spring to life against the background, and the bird on the ledge seems to relish having its photo taken.

RR Something similar had occurred to me, but less well formulated. I am grateful for your comment. At the moment I can only respond by saying: different blog, different voice, or because sometimes the stories have fifferent narrators, different voices. Now that you have mentioned it, may be a new narrator voice will emerge. I'm too close to them at them moment and because the stories seem to pour forth, there is little time to revise or modify. On the whole I would rather keep them flowing than spend too long worrying about stylistic matters important as they are. Thanks again for your helpful response.

L It seemed intent on posing.