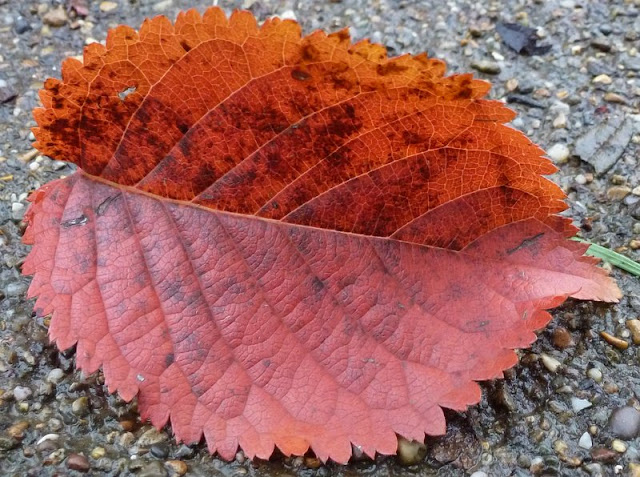 Today's leaf rests on the wet road waiting for the wind to turn it.

In The Grove a cat hides behind a tree hoping to catch a squirrel on the other side.  You can just see the cat's ears sticking out above a root at the bole of the tree. The squirrel is unaware of its pursuer The cat leaps over the root and confronts the squirrel, but reveals itself to be a scardey cat and backs away.The squirrel, not triumphalist retreats and runs up the tree.

The taxi waits in the High Street while a  driver backs a Fiat 500 into a space. The manoeuvre takes what the driver thinks is an unnecessary length of time. "I wonder how long he would take in a real car," he says. He's not the sort of man you would describe as a snob. But he is a snob about cars and  the way they are managed.
Posted by Unknown at 4:07 pm

You're coming over to my way of thinking. No more cars tout simplement but a Fiat 500 (Perhaps cinque-cento.) No more mere spades but a chrome-faced, ash-handled, leather-gripped,etc. Otherwise we are not according humble things the same identity we would give to a mass murderer. There's a flaw in this argument but I'm in too deep to back out.