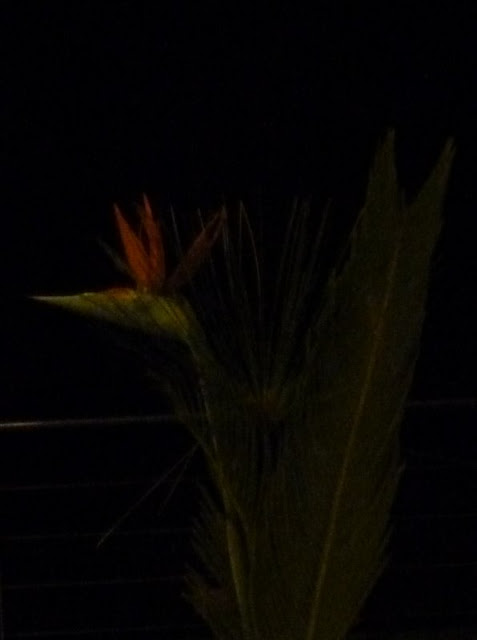 Alberto Bigarre, the owner of our favourite restaurant in Sitges, grows exotic plants in his garden and makes arrangements of them in vases on the tables outside. This strelitzia, bird of paradise flower, looks dramatic photographed  one evening with the sea providing a velvety dark background.

"Have you heard of Norah Roberts?" they ask at the Oxfam bookshop. I haven't. She is, I discover, an American romantic novelist with more than 200 titles under her belt. They point to a large plastic refuse sack on the floor full of paperbacks by her. Somebody must have been a fan. "You should put this in your blog, to help us sell them on," they say. So here goes.

Ugg is or used to be an Australian producer of   boots and other footwear. I express surprise that Australia should have produced, in the Ugg boot, what has become an international fashion brand. Originally they tell me Ugg boots were made to be worn on the beach after surfing The lambs' wool lining was intended to absorb the water from wet feet and to keep you warm. That was before the rather clumsy looking boots spread, via the surfing community, to Southern California  and, as it caught on for more general use, via New York to Europe. Fashion often it seems has its roots in utility.
Posted by Unknown at 4:49 pm

Thank you for trying to help - but Ms Roberts is being sent on to the Chatham Oxfam, where, apparently, the appetite for such writers knows no bounds!