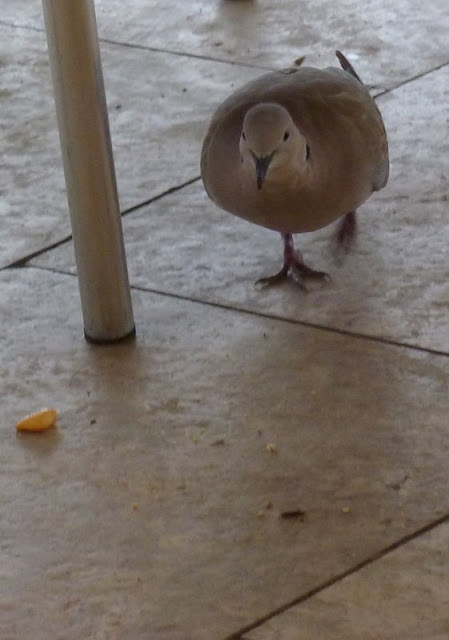 One of the prolific  ringed doves in Sitges finds something of interest under  a table.

On the way home from the airport we stop the taxi at a convenience store on a garage forecourt to buy some milk. My purchase made I return to the car and open the rear door expecting  to see Heidi waiting inside, but it is the wrong car. The driver turns round in his seat as surprised as I am. "Hello," he says in a tone far more aggressive than is usually associated with the word and I retreat quickly. "Jet lag," I mutter, scarcely an appropriate  excuse after a two hour flight from Barcelona. But who's to know. Do I look like a car-jacker?

Next to a "log" of goat cheese at the Sainsbury's deli counter are the words "three for the price of two. "You pay for two portions and get a third free," says the assistant. I was going to have one portion but three are fine for me if the amount is the same. He measures out the length of cheese that I was going to buy anyway, then cuts it into three, and wraps each slice separately. "You've saved a pound," he says.