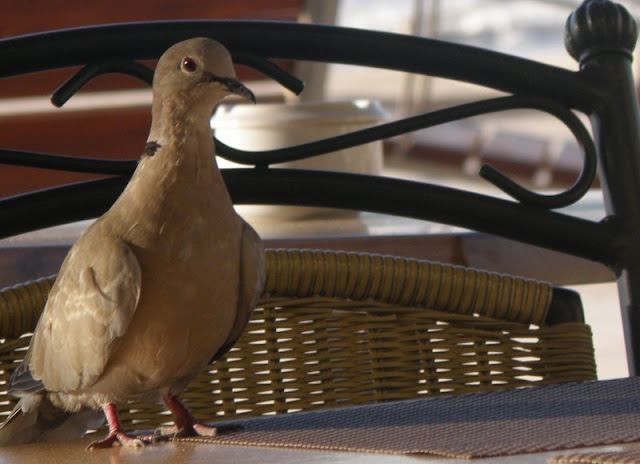 A ringed dove again. This time it is visiting a table outside the hotel.

I post another story on One Fine Day yesterday. It is called Still Counting. The stories come into my head for the most part early in the morning when I am half asleep. A correspondence with Lorenzo da Ponte whom I must get used to calling by his real name Roderick Robinson, on the nature of short stories, meanwhile serves to stimulate the story-telling nerve. This morning, a story which has been lurking in the shadows comes into the light. But another, which I recall effectively rounding off, has disappeared from my memory. Where has it gone?  Anyone seen it lying about? I am hoping desperately for it to return, for having drafted it in my mind,  I thought it good enough to go back rather smugly to sleep.

Geoff   at The Compasses says that when he used to sit outside the pub called The Bedford on the corner of The High Street and Vale Road, he once photocopied some £20 notes and glued them to the pavement. Entertainment followed as passers-by stooped to pick them up or poked at them with  the ferules of rolled umbrellas while looking over their shoulders first to see if anyone was watching.

I'm fond of Pigeons and enchanted by your
sweet curious Doves.

LOL at the story of the photocopied money!!

Just want to say over here that I'm truly enjoying your short stories at your other blog but unable to comment there. I believe the sign-in thinks I'm a robot and just ignores me.

The best ring dove so far, that ruby eye is compelling.

A tale heard during one big winter freeze some years ago in Cheltenham: a young man sat by the boating lake with a pile of 50 pence pieces and a cigarette lighter, heating the coins then spinning them out across the ice so that they bonded to the frozen surface. Asked what he was doing he explained that he hoped that some of the children of a notorious and prolific criminal family might pass by, and tempted by the sight of the money, venture fatally out onto the ice. He opined that it would be worth the outlay...

(Tom also tried to leave a comment on your Centurion story which pleased him very much, but wasn't able to. It seems to be necessary to have a blogger a/c.)

Reminds me of a letter I wrote you when I was in the USA. I announced I was toying with changing my nickname; you told me I couldn't do that since others "owned" me via the nickname. Struck by this situation you went on to expand on it in a passage which is sadly lost to blogging since your reply preceded the technology by more than thirty years. Certain people, you said, had "become" their names. Thus no one else was entitled to the first name Lionel other than the critic Lionel Trilling. Persuaded by this powerful piece of name-dropping (I was in fact reading Trilling in the USA) I gave up my self-centred proposition. Your present-day problem probably resides in the fact that you've never called me Roderick.

Memory and lost ideas. During that period when I was given to blogging ill-advised sonnnets I often woke at three with an idea and began writing it there and then in my head (Which is a clue as to why so much low-grade stuff appeared in Works Well). Once I achieved one and a half quatrains, though I passed a nightmarish period waiting to get to the computer to record them. I worried too that Mrs RR might be disturbed as I tested various lines for scansion by running small cadenzas with the fingers of one hand on the palm of the other while still technicaly asleep in the connubial bed.

Idea for a sonnet. Since Tone Deaf is now little more than a vehicle for publicising my features I found myself looking at my face while shaving and I detected a resonance between the vertical lines there and the decorative pipes of a concert-hall organ. Is this idea somewhat loaded?

C C. They are at their least attractive when they are grabbing scraps of food under tables

M-L and Tom via Lucy Thanks for trying. If I can alter the settings to make visitors more welcome I will certainly take the necessary action. Comments are encouraging..

Lucy That story is beautifully sinister.

Robbie Try as I might I just can't address you as Roderick even now. It is more than just habit. Today I might put it this way: The person and the name become permanently welded. It's different with nom de plumes. You make allowances for them.