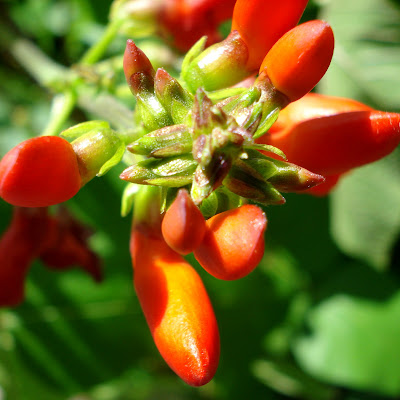 The elder tree at the end of the vegetable garden has sprays of little green spheres - the berries to be. They are spread out in the shape of the saucers, formed of white florets, which preceded them. As the berries swell and ripen they will hang in purple bunches. For the time being I want to photograph the berries while they are still small and green. But, as though they do not like the intrusion, they try to dodge the lens and move up and down in the wind, which bustles about in the tree tops.

Last night as, we are preparing for bed, Heidi points out of the window at a fox in the middle of the road. It stands still as though trying to make up its mind what to do next. "There he goes," says Heidi as he makes for the twitten, "off to the dustbins".
Posted by Unknown at 3:15 pm

Urban foxes may be disreputable scavengers, and quite commonplace, but there's still something rather magical and uncanny about them, especially at night. Here in the countryside they are much wilder and harder to see.

At Kingston a fox squeezed its way down the side of the garage, emerged into our tiny garden, peered insolently at us through the French windows, then entered the garage to mop up food laid out there for the cat. A stylish demonstration of chutzpah.

When we lived in Kent, my husband had a little shed at the bottom of the garden. One evening sitting there working, he turned to see a fox cub delicately step through the door and sit. For ten minutes it kept hm company and then wandered off. The next day from a bedroom window we saw the Vixen with three cubs in next doors tumble down shed!

The luscious, glistening color of the bean flower reminds me of my aunt's favorite lipstick - "Scarlet Woman."

She was anything but.