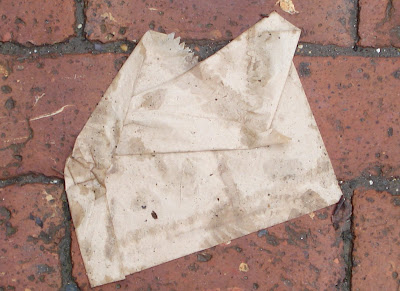 The bag's teeth help when it's new; after use, prints remain of something greasy.

An hour to kill, something to listen to on the radio, I sort out a drawer where bits of paper - expired lottery tickets, business cards with names that no longer ring a bell, instructions for devices now defunct or replaced, labels and tags and post-it notes - have accumulated. I throw them in the wastepaper basket and look with pleasure at the clean tidy space which I have created, ready to fill with more ephemera.

Of early spring flowers, my favourite is the lesser celandine. It's late this year. Gilbert White noted its appearance on February 21st in the Hampshire village of Selbourne, which he made famous with his account of its natural history; and a year later the Hertfordshire botanist, John Hopkinson gave the same dates for the years between 1876 and 1876, according to Richard Maybey's Flora Britannica. The flower, with its heart-shaped leaves and pointed yellow petals, apart from announcing Spring, serves as a good ground-cover in shrubberies and woodland gardens, and does not inhibit the establishment of plants which flower later. The triangle of land known as "The Village Green" in Berkeley Road round the corner from where we live, was always alive with lesser celandine at this time of year, and it saddened me a couple of years ago when well meaning gardeners scrubbed them out, leaving bare earth. It will take some time for the flowers, as I hope they will, to reestablish themselves, if the already invasive weeds do not get their first.

I've wondered about the expression "killing time". When one really thinks about it, it's like "wasting" time, such a precious thing to lose thoughtlessly.

Oh, and about the celandine... I see it's related to the creeping buttercup, a terrible invasive weed here that I cannot eliminate in my garden. Maybe that's why those gardeners pulled it out.

Although it is a member of the Ranunculus family the lesser celandine has quite differently shaped leaves and petals from the creeping buttercup, which is far more intrusive and which, like you, I dig out of my garden when it occurs. The problem is the creeping roots and the fact that even a small piece of root will become a plant. The lesser celandine is altogether more attractive in appearance and in its habits.

Time killing suggests to me something more purposeful than time-wasting. You have an hour in an airport. How do you fill the time as an alternative to wasting it?