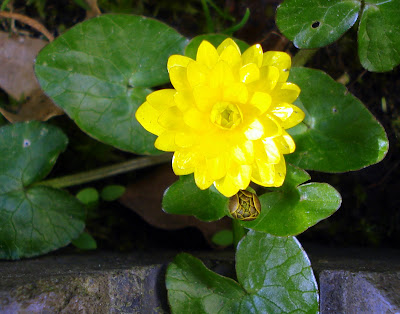 Growing wild in a neighbour's garden, a double lesser celandine. How rare it is, I do not know. But another neighbour recognises it as an oddity. It has the same leaves, as the ordinary lesser celandine, and the petals are of the same shape, but there are many more of them and they come in several tiers. A Google search doesn't cast any light on its rarity or on its existence elsewhere. But happening upon it provides a sense of excitement and discovery. Perhaps it is quite ordinary, but all the same ...

Parked in the High Street is a white Lamborghini with smoked glass windows. It is low slung and squat, streamlined like a fish. So low is it that other cars parked in line with it, even little Fiats and Volkeswagens, tower above it. Its number plate - 1DLV - almost certainly comprises its owners initials. Far from being envious by disposition, I am always glad to see such sample of excellence in design and engineering on public display and in use - on spotting the yellow and black parking notice on the windscreen, I have to admit, that a hint of schadenfreude sneaks in to my mind.

Since I was at school I have owned a copy of Cousin Bette by Balzac. But it is one of those books - my copy is a hard back which retains its pretty blue cover, and bears the price of the 6 shillings I must have paid for it. But although I tried on several occasions, I didn't succeed in getting beyond the first chapter. Now that I am several chapters into La Cousine Bette as it is called in French, I realize that the fault is attention deficit disorder on my part rather than prolixity on Balzac's. When I open Cousin Bette for the first time for 50 years, I notice that the edition is translated by the poet, Kathleen Raine, who happened to be the parent of a university friend of mine. An unexpected connection. Meanwhile, I have mixed feeling about having missed out for so long on one the greatest of French, nineteenth century novels. But I am glad to be reading it now for the first time, and in French, which I would not have thought myself capable of in my idle teenage years,

Lamborghinis look flattened, are completely impractical and don't appear to meet the imperatives implicit in the name dreamed up for the X-type Jaguar - A Tart Trap. Even the most impressionable woman would find no better way of getting out than simply rolling on to the pavement. The model you saw may have been a Murcielago, which sounds Spanish to me. The car is of course made in Italy.

Your critique is helpful. I am I suppose the sort of person who is easily taken in by such flamboyance. On the strength of your words I have cancelled my order for a similar car. I realize that I would have some difficuty in getting in and out.

I am interested by the idea that attention deficit disorder and prolixity may be two sides of the same coin resulting in the relucatance of the reader to carry on reading.
I usually force myself to carry on for the first 100 pages before giving up and often by then the book has got hold of my attention.

Another bite from a different part of this cherry, triggered by Lucas's response. Why do we sometimes fail to complete books we know to have inherent value? Thrice I've failed with The Brothers Karamazov, once having penetrated as far as page 150. Conrad defeats me at a very early stage and yet I want to read him. I have after all read The Man Without Qualities with what seemed like enjoyment, and not too many people confess to that. Some initial dialogue can get you going but surely, as adults, we shouldn't need such cossetting. Other discrepancies: The Third Policeman a raucus experience, At Swim Two Birds impenetrable. And am I alone in finding magical realism a very variable experience. Could Lucas provide a few examples of "getting over the hump"?

First of all the mention of Robert Musil's Man Without Qualities brings back happy memories. It is the strangeness of the relationship between the character{s} and the news headlines about the mass murderer that kept me going.
My hundred pages rule though started much more recently. A good example of a book I'm glad I kept going with is "A House by the Thames" by Gillian Tindall. It seemed a bit dry at first and gradually became an obsession.
http://www.amazon.co.uk/House-Thames-People-Lived-There/dp/product-description/1844130940. Sorry don't think that link is live.

Lucas: Plutarch and I have already formed an insufferably exclusive Proust club, and I am presently trying to force-feed Ulysses on the tolerant people who respond to my blog. But a Musil club, that would require a golden badge. As to persistence in reading I shall bear in mind your 100-page rule but it will be in conflict with an inevitable byproduct of getting older - impatience. Another Becher's Brook - Tristram Shandy. But I need someone to say il vaut le voyage