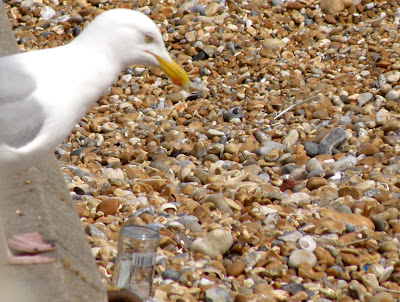 Waiting on the edge.

On the lower promenade at St Leonards-on-Sea, benches are set into alcoves, sheltered by the overhang of the upper promenade. Each alcove has its bench and, this afternoon, almost every bench has a person to itself, who is receiving the sun as though in some sort of communion with it. A woman with red hair sits upright, her back straight, her legs crossed. Further along, an old man with a white moustache and a lined, ruddy face, also reads a book. He leans slightly forward, his knees parted. Still further along the line of alcoves, a black woman sits beside a scooter. The scooter suggests the presence of a child, not immediately apparent. And sure enough, a child comes running.

In Calverley Ground, a group of teenagers, sprawled in a circle on the grass, are eating ice cream. A scoop of ice cream falls out of its cornet. "George!" As George tries to rescue it, "you can't eat that!" He picks up the ice cream and persists in removing bits of grass and grit. "For fuck's sake, George!"

Gull seems to be eyeing his meal prospects. Not much to see, is there?

It's often the case, but sometimes it's worth waiting.

Ah, a day at the seaside? This made me think of our day in Brighton last year.