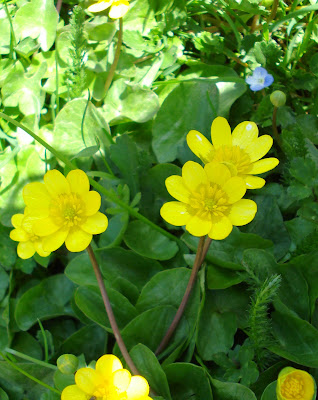 Having told a story about it, I note that  the lesser celandine is much in evidence this year. It is a good year for lesser celandine. There was a time when I would have mistaken them for butter buttercups. But buttercups have spikey leaves and their roots creep underground. Lesser ceandine have the charming habit of closing their petals when it rains or when it is get dark.

As I walk through the garage on my way to the vegetable garden ,I pass the gardener. He is cutting an apple in half with a saw. It strikes me as a remarkable tool to apply to an apple, but he is a man whose eccentricity I have learnt to respect. So I bid him good morning and walk on. A couple of hours later, he is about his work on  a border when I return through the garage. But what is this on the  drive? Four neat apple halves scattered on the gravel. Overcome by curiousity, I retrace my  steps through the garage. "They're for the blackbirds," he says. They love  'em. I was going to eat them myself, but I thought, why not?"

Outside the The Crown at Groombridge, a couple are talking about their inspection of the graveyard next to the church opposite the pub. They were looking for  the tombestone of a woman they had known. "We couldn't find it," says the man. We thought, they've moved it." They haven't moved it," says his wife. " It is simply insignificant, just as she would have liked."
Posted by Unknown at 4:45 pm

I've tried to avoid thinking on behalf of others. The most pernicious example is a remark frequently made when someone has died after a long illness: "She/he is better off now." What the speaker is saying is: "We're better off now.", not having to accommodate the sensitivities of the dying. But this remark elevates the subject to a much higher level. It presumes (on the part of the dear departed) a whole attitude to life and posits someone who believes firmly in their own unimportance. Inevitably it reveals far more about the speaker. Immediately my mind runs on ahead: Which newspaper does he read? What does he do for a living? Go for his holidays? I terrific starting point for a William Trevor short story.

Lovely celandine, they always make me think of you. Have you noticed they have differieng numbers of petals - some have 8, some 9, some 10... there's a little speedwell has crept in there too at the back.

I remember an Inspector Dalgliesh mystery where someone says to him 'Your wife wouldn't have wanted you to stop writing', and he says 'I don't attribute wishes and feelings to the dead' or something similar.

On the other hand, the woman these people were speaking of might in fact have expressed some opinion or wishes about her tombstone. I'm just quite impressed at such neat snippet of conversation so well picked up!

She,(the speaker), struck me as the sort of woman who hangs back, who doesn't like to push herself forward, and who approves of others who are modest and lacking in presumption.

I hadn't notice the variation in the number of petals, Lucy, but I have noticed that the petals vary in shape. Some are pointed and some rounded. According to Richard Maybey in Flora Britannica an obsolete name for the flower is pilewort - the herb given for piles. This is based on The Doctrine of Signatures and on a fancied resemblance between the the knobbly tubers and piles.
Perhaps surprisingly, the learned Geoffrey Grigson in The Englishman's Flora, does not include pilewort in his long list of local names, but he does refer to one of its name, "Figwort", in the context of its bulbous roots. "The root tubers," he writes, " suggested the teats of a cow, while the yellow petals suggested butter. So in the Highlands and Islands, the herb was important as 'lus an torranain', "the herb of St Torranan or St Teran, the missionary of Uist. It was gathered with Gaelic charms:
I will pluck the figwort
With the fulness of sea and land,
At the flow, not the ebb of the tide,
By thine hand, gentle Mary ...
And to produce a high tide of cream in the cow's udder, the root, 'the cluster of four bulbs like the four teats of a cow" was hung in the byre or in the cow fetter".

How lovely, that Celtic incantation. I wonder how one was supposed to apply it for piles!