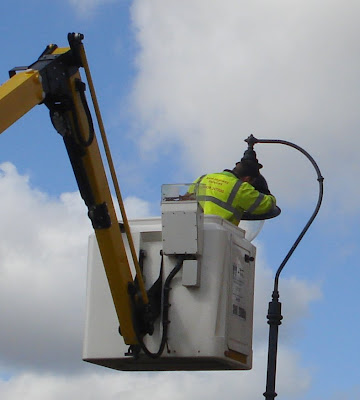 Let there be light.

With the 10th birthday of Tate Modern coming up next month I am reminded, by a photograph in The Financial Times of the extraordinary, moving and mysterious installation in the Tate's vast, 10 storey-tall Turbine Hall by Olafur Eliasson called The Weather. It consisted of a glowing, sun-like disk surrounded by a permanent mist, high above the hall, which it completely dominated. I went to see it back in 2003, when it was a prime attraction. The photograph shows the shadowy figures of visitors to the Tate, lying on the ground and looking up at the huge "sun" or simply profiled against its orange light. It could have been sinister, but its light, suggestive of a midnight sun, was hopeful rather than apocalyptic. It seems astonishing that Tate Modern should only have been in existence as an art gallery for 10 years, when you consider how important a part of London and British culture it has become.

The fish stand at the Farmers Market in the Pantiles is busy this morning. Two fishmongers are competing to use a single filleting board. They dodge and weave behind the stall. "There's not a enough room for a draught," says the senior of the fishmongers.

"There's not a enough room for a draught..."

My mother's expression, for stating the same thing, was "Not enough room in here to cuss a cat!"

We used to call them access platforms which was a dullish term. I suspect it was the Americans who called them cherry-pickers and thereby endowed them with life.

Swing a cat, too. I heard someone of the praying persuasion say once that there was not room enough to pray.

Cherry-pickers. Thank you. All that is needed now when the season comes round is a tree loaded with cherries.