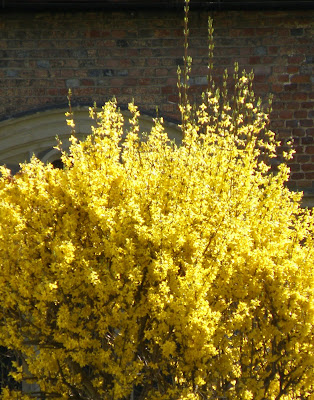 Suddenly the forsythia outside the church at
Groombridge Place bursts into flower.

Sometimes you read words written a long time ago, which surprise you by their freshness and truth. Balzac's short novel Le Colonel Chabert tells the story of a soldier, left for dead on the battlefield. He survives, undergoes many hardship and after 10 years returns to Paris in poor health and in poverty to find that his wife has married again and has two children with her new husband. She has much to lose by recognising that her first husband is still alive, and he, much to gain by reestablishing his identity. He tells his story to a lawyer whom he hopes will take up his case. Half way through his account, "'Where was I,' said the colonel with all the simplicity of a child or of a soldier, for there is often something of the child in the true soldier; and almost always something of the soldier in the child...'" When I think of the soldiers I have known and read about in history and in the present day, and the child that I was, it strikes me that Balzac got it right, even though it is almost 200 years since he made the observation.

For some time there has been a red and a white, climbing rose on either side of the bay window that looks into our little garden. The red rose climbed up the wall and was quickly out of reach if you wanted to cut a flower or to dead head. The white rose, less exuberant in habit, kept to a rather dark corner between the window and the hedge. It is only recently that I have realized how easy it is to train climbing roses, and have come to see how foolish it is to ignore the benefits of training them. Today, with the help of a stake, some eyes screwed into the wall and some strong twine, I lead the red and the white rose under the window so that they meet in the middle of the bay. For sure, "Sumer is icumen in..."

It is my view that as time goes on the only things that change are technology and costumes and even they get revived and revised. I think the play we are all in and the parts we play are repeated through each generation, decade, century and era.

As one after another the faces of men dressed in their desert drabs pass like tombstones across our TV screens the frequent reaction is: "They're so young." It is one of the several tragedies of war that they must be young, inexperienced and strong in the belief that they're going to live forever. How else could they do it? I think Shakespeare was wrong with "seeking the bubble reputation even in the cannon's mouth." These young men seek nothing other than to kill the enemy and, if we insist on having wars, we can't have it any other way. It's no place for poets. We are nevertheless lucky to have Balzac come along and pick out truths from this ghastly activity.

It's human nature, I suppose, that remains the same, CC.

BB: Are you, I wonder, more or even more against war now than when you were younger? I know that I am, and wonder that apparently rational people can be so driven by territorial or idealistic motives to kill other human beings. I don't think that I was a pacifist when younger. I wonder whether I would have the courage to stand up as one now.

I'm not sure I was capable of sustained moral judgement when doing my National Service. There were too many postings to be scared of: Kenya, Aden, Malaya, Cyprus, all of them places where you could get your head shot off. Pacifism is another thing. Bertrand Russell advocated pacifism even prior to WW2 and I doubt whether I could have agreed then, thus my moral stance is blurred. There is another moral issue emerging at the moment: if Iran appears to be developing atomic weapons can we afford this, given that there will be plenty of Iranians prepared to go to heaven if they die killing off the infidel? For the moment I'm comforted by the fact that there's a world of difference between the suicidal zealots and the cynical political leaders who only give up their lives involuntarily. Mrs BB takes a more pragmatic view: Israel is likely to take the first move if Iran is seen as a threat and, more encouraging, Iran could well be on the brink of a popular revolution which, if successful would put nuclear activities on the back burner.