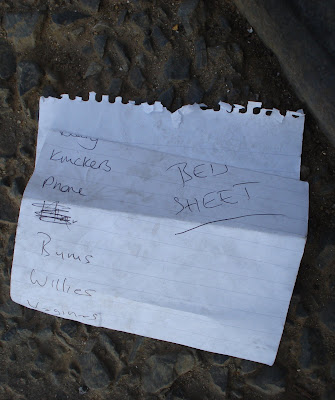 In the gutter a curious list suggests unusual interests.

Julie and Julia in which Meryl Streep plays the American food writer Julia Child's appeals to me because its subject combines two of my great interests - cooking and blogging. The Julie in question is a young American woman who sets out to cook her way through every recipe in Julia Child's massive Mastering the Art of French Cooking, gives herself a year in which to perform this feat and keeps herself up to the mark by recording her progress on a blog. The process of blogging, the appreciation of comments and the process of boning a duck a described with equal accuracy. And, as the film's action switches from 1950s France to the age of blogging, you learn how two remarkable women tackled two seemingly impossible challenges. Anyone who likes neither blogging nor cooking would probably not share my interest in this film. But for me it is a beautiful thing.

After a long period in the cold earth, my first sowing of broad beans has begun to show little green shoots. Nothing is more dispiriting than to sow seeds which fail to germinate.

We really enjoyed Julie and Julia! Meryl Streep is one of my favourite actresses and she as always did a remarkable job but "Julie" irritated me sometimes. Yes, a beautiful thing.

...and please continue to Blog. I am such a fan of your writing and TBTs. My mother came for Easter and whilst we didn't go to church I tried to explain reading inspiring Blogs to her and said it was a bit like saying ones prayers before one sets out on the day. I don't think she understood my gist at all and Elspeth Thompson's tragic death gave her the impression that I had perhaps become involved with a mysterious cult. Perhaps I have but it keeps me happy. Thank-you. (Of course I am a great fan of Clare Grant's TBTs)

Best not show Anonymous's mother the wacky shopping list then!