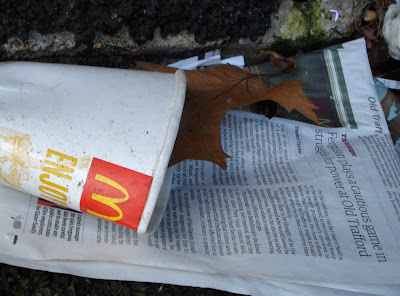 Messages are mixed: the paper cup is squashed, a leaf curls over the text.

As I pass the oddly named Smart and Simple hotel in London Road, I see a man go in through the main entrance. An alarm sounds. He looks worried and a little indignant. The alarm continues. It starts again, but this time, it is a different, undulating, almost musical sound.
A young woman appears and seems to be making soothing noises to a car parked outside. A face appears at a window of the hotel. She shrugs up at the face. It is the car alarm this time for certain, but is it the same alarm as moment ago? Did the hotel alarm sound and set off the car's alarm system in sympathy? I shall never know because the car sounds too much like a tortured violin for comfort and indeed for my sanity. I walk on.

One of the radiators in our house has been ticking. It is an aimless, demented ticking. We do not have a key to allow the air to escape. A neighbour brings one round. I have to remove some books from a shelf to get at the vent. I loosen the vent. Water, preceded by a whoosh of air, streams out. The little plastic key slips out of my hand. Water pours over the other books on the shelf. I have to move them to find the key. They are books I haven't looked at for years. A curious old friend: The Man who Mistook his Wife for a Hat by the neurologist Oliver Sacks; and two friends which I have always meant to but have never got round to reading Experiences of an Irish R.M by Somerville and Ross (you rarely pass a second hand bookshop without seeing one in the display outside, widely unread I suspect); and Garibaldi and the Thousand, by G M Trevelyan. Writing in 1920, the author says: "The paradox of Italy is this: her civilisation is the oldest in modern Europe, while she herself is the youngest of the great States." Nearly a hundred years and a world war later, paradox it may be, but one which has been swallowed by history.

I am interested that you attributed radiator ticking to an ingress of air. I can't quarrel with your diagnosis since the swooshing proved trapped air was escaping. However our radiators tick all the time purely as a result of heat expansion and contraction. What's more pipes running through a rather flimsy stud wall bend quite noisily for the same reason. One day I will make a list of all the noises the house and the various artefacts therein emit. Some of them are quite subtle and I had difficult tracking them down. But I'm not going to engage in anthropomorphic rubbish about the house speaking to me. If anyone's doing any talking they're primarily the slipshod plumbers twelve years ago.

Thank you for your helpful comment. The radiator still ticks. The air, very little of it, was irrelevant. It's reassuring to know that it is just benign heat that is causing the noise. The noises that houses make is indeed a topic. I look forward to reading about yours.