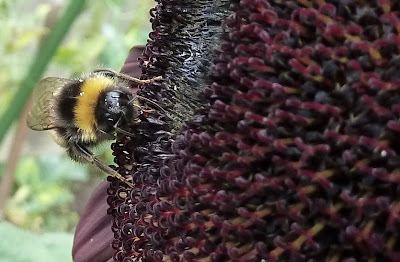 The surface of one of the bronze sunflowers, which are now opening in the vegetable garden, with visitor.

An elderly couple who, after some time we are beginning to chat to when we bump into them, greet us outside The Black Pig where we and they have had lunch. We introduce ourselves properly. They are Dorothy and Henry. It's helpful to know. " I  always recognise you because of your hair," says Dorothy to Heidi. "And you, because of your hat,"  she  says to me. I recall that the first time we met, she told me that her husband referred to me as "the Frenchman", because I used to wear a beret at the time.

A sort of risotto, made with pearl barley instead of  rice, is not unknown to restaurant chefs. The technique of allowing the barley slowly  to absorb hot broth, mirrors that used with rice and broth in risotto.  I have been making version of this dish for some time, using chicken as a main ingredient. In recent years, I have added leeks and prunes to the ingredients. The result  is a variation not only on risotto but on the Scottish,  cock-a-leeky. The latter is made by boiling a chicken with leeks, barley and prunes. You use the stock as soup, which is served as a first course, followed by the chicken as a second course. My dish combines the ingredient  of cock-a-leeky with the cooking method of risotto. It is on the menu to night by special request.
Posted by Unknown at 5:11 pm

Triple-header today, Plutarch: wonderful photo (will come back to look at it several times), delightful images of you and Heidi painted by Dorothy, and a mouthwatering description of your dinner. Plus, I've learned something I didn't know: prunes in cock-a-leeky!

Prunes have apparently been used in cock-a-leeky for some time. In a book called Food of the Western World, I read that, Tallyrand, the French stateman, when he fled to England during the French Revolution, acquired a liking for cock-a-leeky, thought that the prunes, though stewed with the soup, should be removed before serving. I happen to think that he was wrong.