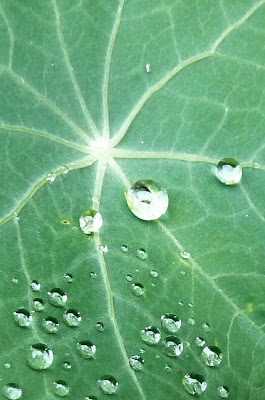 Rain drops and the veins of a nasturtium leaf.

From the bench  in our garden in the evening we watch pigeons on the roof opposite. There is a pair which sit in the setting sun and nuzzle each other's neck. A third pigeon appears on the scene. I call him Roger the lodger. He takes up a position at one one end of the roof and tries to approach  the lovers. But is challenged by the male whereupon he flies off into the lime tree. The pair nest in the wisteria below the roof. And sometime resort to their second home, a spare nest, in  the wisteria above out front  door across the road. Roger is still around, and, though a handsome and stalwart bird, seems reluctant to intrude.

From the train I see that the budlea, so untidy and scruffy at other times of year, is now in flower. Its purple inflorescences probe the air, and match the brightness of the purple loosestrife now also in floweron patches of wasteland.
Posted by Unknown at 5:43 pm

Beads of rain upon the waterproof, oilskin map of the Kingdom of Nastursia. Almost time for the National Festival, and the National Games.

Alas, I cannot attend this year. I will miss the spicy-sweet nastursium fritters, the pickled nastursium leaves (similar in taste to pickled grape leaves, but peppery), and can only hope that my favorite leaf-flinging (think frisbee) team holds onto the championship for another year.

Where'd you find that map, by the way? From the divisions, shown by the lighter green lines, this is one of the older maps, pre-1934, before the northwestern regions formed a socio-political-commercial alliance, in a failed bid to unify the Kingdom under one banner. Hang onto that one, Joe, for it is very valuable.

Well, balderdash! I keep misspelling the Kingdom's name. No wonder they revoked my passport last summer!

Ever think Roger the lodger might be a nearly grown offspring returned home
after the Pigeon pair had begun enjoying their empty nest?

You paint the most interesting images.

Crow The map carries the imprint, 1903, on the underside of the leaf. It is a fact that ladies-in- waiting to her majesty Queen Horstensia of Nasturtia wear drops of rain attached to the dimples on their faces as a form of jewelery. Despite or perhaps because of the renowned gaiety of the ladies, the drops are intended to mimic tears. The method of fixing the drops to their faces is a state secret.

CC I think not. Roger has
the distinct look of a pigeon with experience of the world, eager to share it with more simple stay-at-home birds, particularly of the opposite sex.