crocuses, the smell of books and randomness 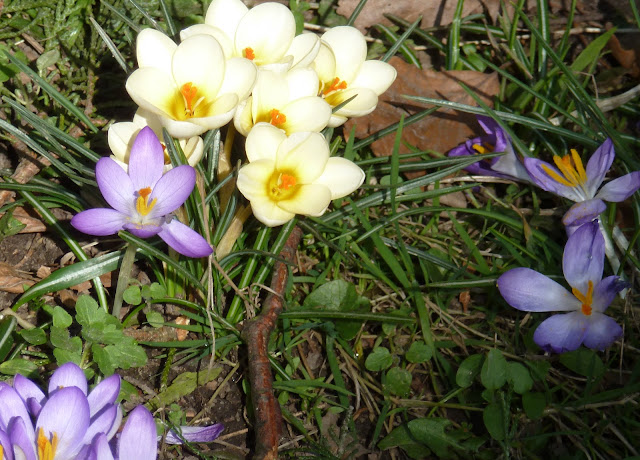 The buds still closed looked like spiky bits of litter until yesterday's sun when the crocuses open like little flames.

"It was a melancholic afternoon when I smelled the the old books in Mandelbrot's library. This was on a hot day in August 2005, and the heat exacerbated the musty odour of the glue of old French books bringing on powerful olfactory nostalgia... However abstract I wanted it to be, Literature has a physical smell and this was it."
Nassim Nicholas Taleb is writing of his encounter with the mathematician Benoit Mandelbrot who developed the concept of fractals. In particular Taleb is exploring the nature of randomness which a central theme of his book The Black Swan about the critical importance of the unexpected in forecasting. But this quote says something important about the physical nature of books which is untranslatable into electronic readers.

The aim of my scrap book is to place the familiar in an unfamiliar context often on an unlikely scale. The result is to enliven images which may seem jaded through over-exposure like Van Gough's sunflowers or Rodin's Lovers.  Looking quickly back, I see for example: The Mona Lisa next to a Bansksie Mural; Virginia Woolf looking soulfully down on the new Shard skyscraper in London; a small  black and white photo of Charles Dickens above a larger colour portrait of Ravi Shankar; Henry James next to a field mouse; Jane Austen next to the @ character taken from an ad presented as though it is a logo. Randomness as Nassim Nicholas Talib would agree can be inspirational.