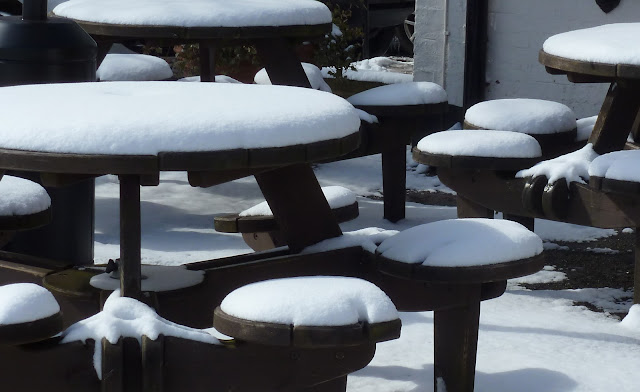 Snow on pub tables, just a few days ago. It melted and it has rained since almost continuously.

Wine, because most of it is imported and the pound is weak,  is becoming  increasingly   expensive. Congratulations then to Sainsbury's on its handsomely labelled House Wine range.  All the wines are less than £5.00 a bottle but what is more important, despite the fact that their  provenance is not always precise, and that they are unlikely to interest wine critics,   they are extremely well made by wine-makers who know what they are doing. The Pinot Noir from Roumania challenges more expensive competitors from Burgundy, the traditional home of the grape. The Beaujolais is excellent. and the Cabernet Sauvignon satisfyingly tannic as you would expect of  Bordeaux from where it comes rather than from the New World. Today I noticed under the same House Wine label something I haven't tried. It  is labelled simply Hock. Who talks of Hock nowadays? The term is generic and was (still is it seems) used to describe wines from the Rhine regions of Germany.  The term comes from the German Hocheimer denoting wines from Hochheim.on the river Main just west of Frankfurt.
Spying the  Sainsury bottle  on the shelf today  meanwhile reminded me of John Betjeman's poem about the arrest of Oscar Wilde at the Cadogan Hotel in London.
"The poem begins:
He sipped at weak hock and seltzer
And looked at the London skies
At the Nottingham lace of the curtain
Or was it his bee-winged eyes..."
I can't say that  I was tempted to try it with or without soda water.

I am grateful to Lucy Kempton for her comment yesterday on the new layout of this blog. She says that at first she found it confusing. So did I. It is not entirely  clear to me how I arrived at it. A piece of serendipity I think. Meanwhile until she passed on her discoveries about its hidden depth I have to admit that I was not aware of all of them. I hope meanwhile that not too many visitors have been confused.  If they have perhaps Lucy's discoveries will compensate.
Posted by Unknown at 5:16 pm

Wasn't hock and seltzer one of Byron's favourite tipples? I still love and frequently recycle the snippet of dialogue from 'Up Pompeii';

'Which wine shall we have?'
'The wine from Germania, I think,'
'Oh yes, the hic-haec-hock!'

The default view of your blog when I come to it seems to have flipped to 'sidebar', which only shows the current post, but others are available, one at a time, by going to the sidebar on the left. It wasn't initially like that, though I suspect the problems I had commenting were something to do with it, and it's not what one expects of a blog, but is more like a series of permalinks. However, one can easily switch to 'classic' (which by its very name one would think would be the default view) or a number of other options, by way of a drop-down menu also top left. Doubtless if all blogs had always been thus laid out we'd be perfectly used to doing it that way.

Anyway, it's good to be kept on one's toes!