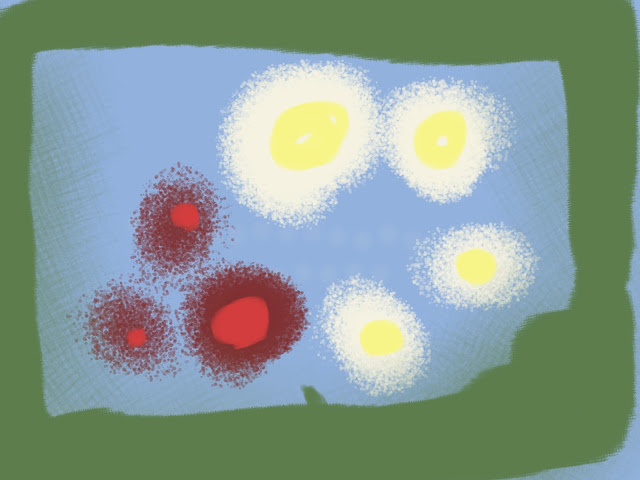 Small explosions. I enjoy the suggestion of texture provided by the Brushes app.

I have always liked Alexander the Greats' response to the knot in the rope bark  with which Gordian, King of Phrygia fastened the yoke of a waggon to a beam. So ingenious was the knot that it was said to be impossible to untie. Alexander was told that whoever succeeded in undoing it would reign over the whole East. He of course cut it with a sword and ruled over most of the known world.  Our own Gordian's Knot is the hedge which borders our garden.  It had, in the 25 years in which I have lived here, reached a height which requires a ladder and extending shears to trim it. Keeping it trimmed, from being a pleasurable chore, has come to be a massive and expensive labour.  Or such was the case until  today I had its height reduced by about a third. The new buds of the privet have not yet appeared and this is the optimum time to act. It seems that the hedge is still high enough to shelter us from the gaze of passing pedestrians but there is a lot more light in the garden and encouragement for our plants to grow.

Bakers are advised to  use a razor blade to slash  the crown of their loaves after the dough has proved to create a pattern on the crust. I have never bothered to find a razor blade when baking and so my loaves have been  smooth and unadorned.  But the other day a present came through the post from Paris in the shape of a tiny curved blade designed for bakers. My latest sour dough loaf looks like one of those artisan loaves you find in farmers' markets. I feel a prickle of pleasure.
Posted by Unknown at 5:17 pm

The format now seems to be further developed since when I last saw it. I like the way images and thumbnails appear together on the left, and the links appear as amouseover menu on the right.
I like Small Explosions.