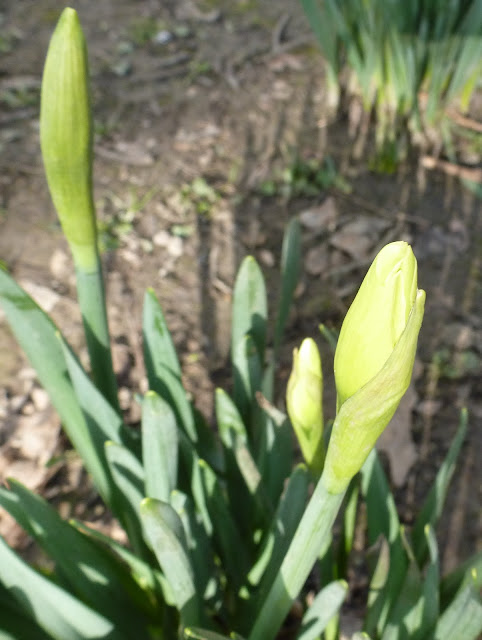 Imminent daffodils which the sun is unfolds today.

In the last few day I have pasted  at random photographs of three people - Oscar Wilde, Andy Warhol and Alfred Hitchcock - into my scrapbook.  The book is based on and seeks, though sometimes patterns emerge,  random and unexpected contrasts out of scale and out of sequence.  As I look  at their pictures it  strikes me that all three had in common the ability to construct images of themselves  which we remember apart from their artistic achievements for their impact as characters in the history of anecdote. Wilde is posing , pretty as a girl, his long hair brushed over his ears, his eyes looking into space, his hands behind his back. Warhol stares out of the frame in a blond wig, looking slightly sideways, his mouth set in a stubborn, reproachful line. Hitchcock, tubby, his embonpoint  to  the fore, hands in pocket, scowls as though he is considering something to torment you with. You might call it "character building" though it would mean something rather different from accustomed usage.

At the medical centre the practise nurse says that she would rather be in her garden than in the surgery  this fine morning: "My husband made a bonfire at the weekend, and I have to tidy up after him."
Posted by Unknown at 5:18 pm