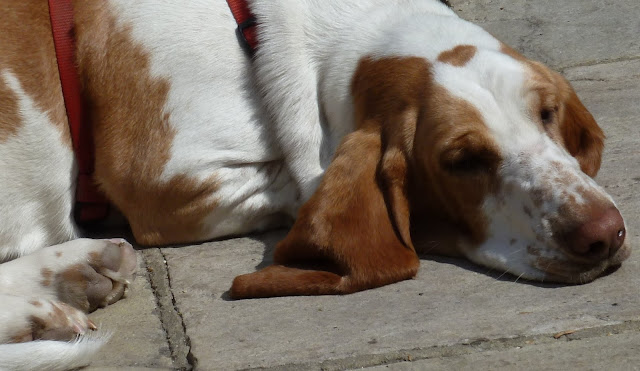 Fellow diner resting at The Griffin,Fletching.

Politics are not for me. I  see both sides of the question and sometime other sides as well. So to choose I am directed rather more by the quality of the writing, the wit and the judgement. Years ago I read The New Statesman as a literary as much as a political magazine. Now it is not so much a swing to the right as entertainment that draws me to The Spectator. I buy The New Statesman the other day to see what I am missing, and even contemplate switching to it, but in terms of a good read it simply does not match.

When I was young they told me that I spent too much time in a dream. Sometimes, apparently  I would start undressing when I was supposed to be dressing and vice versa. My Father used to tell me how important it was to be alert. That was a favourite word of his, alert. I think of it now as I do the sudoku in The Independent every morning. Not waste too much time on it you have to be alert in order to avoid spoiling the show by inserting the wrong number and failing to notice the mistake.
Posted by Unknown at 5:53 pm

Perhaps you could explain the appeal of sudoku although I realise this may be difficult - as with all addictions. I have to admit I've only glanced at the rules and there was nothing in them to suggest any obvious kind of reward. Just a string of numbers without a direct and/or detectable relationship.

I have confessed before to my addiction - solitaire. But here I had the further aim of getting the thing out as quickly as I could. Thus it became an act of prestdigitation. In the days of rather slower computers I managed 98 seconds from the first card movement to the end of the "cascade" sequence. The hours I've wasted have been innumerable.